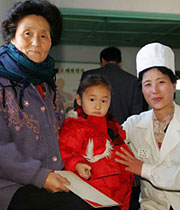 WASHINGTON, June 7 /Standard Newswire/ -- Former Congressman and U.S. Ambassador Tony Hall stated today that he is deeply concerned about the chronic food shortage in . He warned that politics between and food donor countries threaten the well-being of the Korean people, and could contribute to a humanitarian crisis. Ambassador Hall traveled to last week representing Mercy Corps, an international aid agency that has worked in for more than a decade.

"From what I saw and heard, it is clear that the food security situation in remains very fragile. At best, I would say the production levels are vulnerable, and most likely there could be a major food gap between what is needed and what is available through production and current donations," said Ambassador Hall. His observations were made after touring agricultural areas in the north and south of the country, and meeting with United Nations representatives and development organizations.

The Mercy Corps delegation noted that 's food supply is at risk because of a potential "perfect storm" of factors: Food production in the country is insufficient, and food contributions from major donors—including the , , and —are decreasing and closely linked to contentious political situations. Contributions from the United Nations World Food Programme are declining sharply because of a lack of donations. In addition, the region is prone to dramatic weather events, such as floods or typhoons. A repeat of last year's flooding could deal a major blow to anticipated harvests.

"We have long advocated that food be given on the basis of need, not as a political tool," said Mercy Corps President Nancy Lindborg, who traveled to with Ambassador Hall. "We need to make sure that food reaches those who are most in need. As President Ronald Reagan wisely said years ago: A hungry child knows no politics."

The delegation noted significant progress in the eleven years since Mercy Corps started operations in , at the height of the famine that killed up to two million people. Despite advances in both rural and urban areas, they observed signs of continuing food insecurity.

"We're dealing with a very fragile situation," explained Mercy Corps President Lindborg. "A continued lack of food contributions could quickly erase the progress that's been made since the last famine." Beyond food contributions, Lindborg stressed the need for increased health interventions and food production capacity.