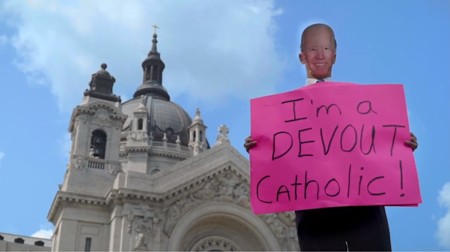 The Silence that Kills was filmed in several states, in front of multiple Cathoilic Cathedrals.

The film has two main themes:

Points of interest in the film:

3:40 Drama: Bishop demands Jesus leave his house, and then discusses why with the media.

13:50 - 17:30 Joan Andrews Bell and Father Imbarrato call on faithful Catholic to protest against and confront bishops who fail in their duty. This section includes footage of Gary Boislair preaching to multiple bishops, and pro-lifers confronting Joe Biden's bishop at his home in Delaware

21:28 - One minute of pro-lifers calling on bishops to tell the truth, taunting them: "What are you so afraid of?"

The entire film, including credits, is 23 1/2 minutes long, and is highly produced.

Permission is granted to use parts or all of this presentation in any format. Permission granted to cut out clips for use in other venues or videos.

To schedule an interview with Randall Terry or any of the main actors, email RandallTerry2020@gmail.com or call 904-826-9989.