'The Devil' Defaced Billboards for 'The Chosen'

Billboards for Hit TV Series About the Life of Jesus "Defaced" Nationwide, as Part of Ad Campaign

DALLAS, April 13, 2022 /Standard Newswire/ -- What started as an "of course a Jesus show would advertise with billboards for Easter" took a sharp turn when their national outdoor ads were seemingly and collectively defaced with graffiti. The vandalism mocked the show's key tag lines, all with a call-to-action to visit a URL that landed users on thechosenisnotgood.com. The website contained a vague invitation to get answers on April 12th @ 3:33 pm PST.

The Chosen, which has over 350 million episode views through its first two seasons, shared images of the defaced billboards on social media. Within 30 minutes, it garnished thousands of comments ranging from speculation, curiosity, and downright outrage. Some fans, however, read between the lines and realized it was from The Chosen itself.

The April 12th livestream revealed a satire video featuring the devil, reminiscent of C.S. Lewis' Screwtape Letters. The website contains links to the devil's social profiles (where he takes credit for the billboards) and a playable parody of "Space Invaders" featuring characters from the show. Produced by Harmon Brothers, the ad agency behind the viral "Squatty Potty," "Poo-Pouri," and "Purple" campaigns, the video itself has nearly half a million views on Facebook and is growing rapidly on YouTube.

"I do regret not informing and including our core fans in our defacing gag, because that caused some unintended confusion and disappointment," said Chosen creator Dallas Jenkins. "But moving forward, we're extremely excited about this campaign and are already seeing new audiences who previously weren't interested in the show."

Dallas will address fans on the campaign in The Chosen's livestream at 8:30 pm ET tonight on YouTube, Facebook, Twitch, and The Chosen app. This week The Chosen has been showing live two episodes per night of Seasons 1 and 2 as "Countdown to Easter."

The Chosen and Angel Studios made it clear that this is only the beginning of the campaign. "Allstate has Mayhem and Chick-Fil-A has cows," said Angel Studios co-founder Jeff Harmon. "It would only make sense for The Chosen to have, well... a devil. We hope people enjoy the humor and effectiveness this modern Screwtape-type campaign offers. We have a lot of great things planned," he continued.

The Chosen is the largest fan-supported show in history and the first-ever series on the life of Jesus. You can watch The Chosen completely free by downloading their mobile app or streaming via the Angel Studios TV app.

ABOUT THE CHOSEN
The Chosen completed its second season in the spring continuing its unprecedented success as the largest fan-supported entertainment project of all time. It has been translated into 58 languages and counting and consistently ranked in the top 50 entertainment apps on iOS and Android. It is completely free to watch on the app that connects directly to streaming devices with no fee or subscription necessary and generates income for future seasons when viewers choose to "pay it forward" after viewing. The Chosen is produced by Loaves & Fishes Productions and distributed by Angel Studios.

ABOUT ANGEL STUDIOS
Angel Studios is the home of stories that amplify light. The "Angel" community chooses which titles Angel Studios will support as the projects get funded, created, and distributed. Angel Studios allows creators and audiences to form passionate communities around their creative projects, making the story behind the story as important as the final project itself. The studios’ first projects—The Chosen and Dry Bar Comedy—have earned billions of views around the world. Learn more at Angel.com 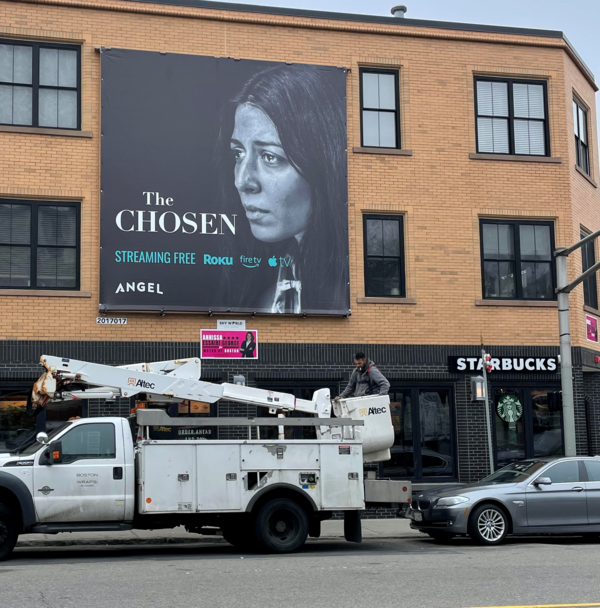 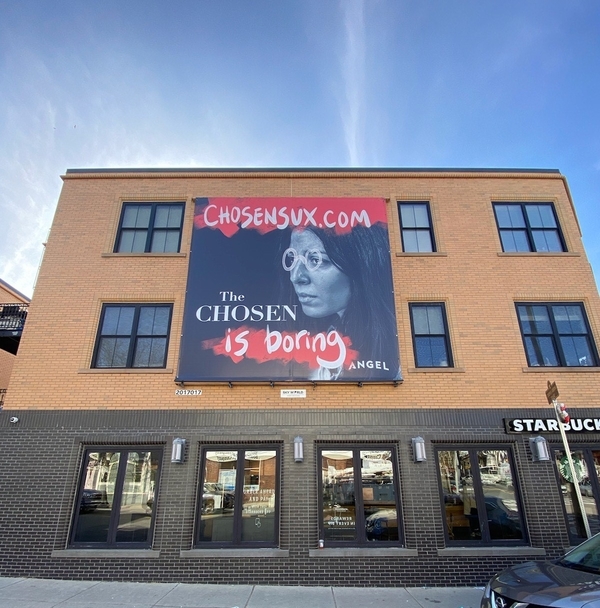 Before and after images of a billboard in Boston, MA was "defaced."