LANCASTER, Penn., Feb. 9, 2022 /Standard Newswire/ -- In one month Sight & Sound Theatres® will premiere the brand new original stage production "DAVID," coming to audiences in Lancaster, Pennsylvania beginning March 12, 2022. Almost four years in the making, "DAVID" is a state-of-the-art live experience that uses theatrical wonders to take audiences inside the story of one of the Bible's most legendary figures who notoriously rose from shepherd to king after defeating the giant Goliath. 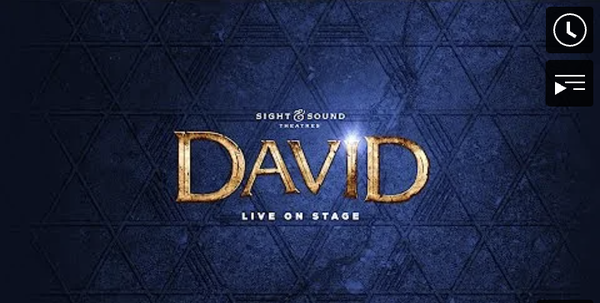 Sight & Sound witnessed God's faithfulness as it faced its own Goliath during the pandemic. Forced to close both its Lancaster and Branson locations in 2020, Sight & Sound had to reduce its staff from hundreds to only a handful – yet the vision for "DAVID" continued to become a reality.

"Early on in producing 'DAVID,' we started to feel as if we were ahead of our timeline," said Show Producer Ryan Miller. "And then, the pandemic happened and the whole theater shut down. Suddenly this very collaborative process that we relied on came to an abrupt stop. Yet, God had placed a passion in our hearts for this story and we trusted that He would help us bring this production to completion."

In the wake of the shutdown, Sight & Sound's leadership decided that even without employees on-site, they were going to move forward with the production timeline of "DAVID." Miller and a small group of key players worked on the story independently for a few months until the full team was able to be back creating together.

"I was overjoyed when our dynamic team finally returned and was able to collaborate on this production," said Josh Enck, President and CSO of Sight & Sound. "God brought us through yet another trial and once again proved his faithfulness – which is what we see reflected beautifully in David's story."

The production of "DAVID" will freshly present the familiar Bible story when it premieres on Sight & Sound's 300-foot panoramic stage in Lancaster, Pennsylvania with giant sets, unbelievable special effects and original music inspired by the Psalms. Additionally, theater attendees are in for a surprise at the reveal of Goliath, one of the most complicated special effects Sight & Sound has ever designed.

"This show will break down the complexities of who David truly was," said Sight & Sound Director Marketing and Communications Katie Miller. "We know he was a shepherd, a warrior, a poet, and a king. We're excited to take audiences inside his struggles and triumphs as we come to know the man who is remembered, most importantly, as a man after God's own heart."

After unprecedented victories lead to devastating failures, this passionate warrior will face the biggest battle of all: the one within himself. Come alongside this young shepherd on his journey to become a man after God's own heart.

With original music inspired by the Psalms, "DAVID" is a state-of-the-art theatrical experience for the whole family. Witness one of the most legendary Bible stories as it comes to life with spectacular special effects, massive sets and live animals in this brand-new stage production from Sight & Sound Theatres.

About Sight & Sound Ministries
Sight & Sound® is a ministry on a mission to bring the Bible to life through live theater, television, and film. What started over 45 years ago as a traveling multimedia show has today become a destination for over 25 million people. With two state-of-the-art theaters, over 1 million people walk through their doors each year. In 2017 Sight & Sound expanded beyond their two locations with filmed productions appearing in movie theaters nationwide. Sight & Sound TV launched in 2020, and this online streaming platform has since welcomed a global virtual audience from over 175 countries around the world. For more information, visit www.sight-sound.com.