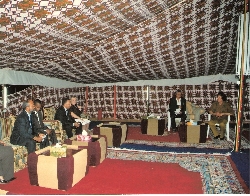 SUGAR LAND, Texas, August 18 /Standard Newswire/ -- Officials of the American Libya Trade Mission Association (ALTMA), the National Conference of Black Mayors, Inc. (NCBM), and the Special Envoy of the NCBM, Hemali Ghaddafi, met with Libyan Leader Muammar Ghaddafi in Tripoli on August 1, 2008. A proposed Summit between the United States and the African Union, to take place in 2009 was discussed and enthusiastically endorsed by Leader Ghaddafi.

The delegation was led by the American Libya Trade Mission Association at the invitation of the Green Center and the RCM of Tripoli, Libya. Others parties to the delegation were from the National Conference of Black Mayors, Inc, Southern University of Baton Rouge, Louisiana, and business people from the United States. The delegation attended a three-day conference at the Green Center at Al-Fatah University, and concluded with the meeting with Muammar Ghaddafi.

Libya is seen as a leader among African countries. Libya is encouraging unification of Africa and have devoted considerable resources in the Continent to aid in healthcare, education and development. Libya's leadership in Africa places them in a unique position to support the Summit between the US and Africa. The United States has lagged behind China, India and Europe in influence in Africa, therefore, the Summit will open the door for dialogue and cooperation in many areas.

"Warming relations between the United States and Libya, with the final settlement of all outstanding issues between them, has opened the door to many positive developments as the two countries work together on African issues" said Carranza Guidry, Executive Director of the American Libya Trade Mission Association.

The American Libya Trade Mission Association was formed in 2005 for the purpose of promoting trade and investment between the United States and Libya.