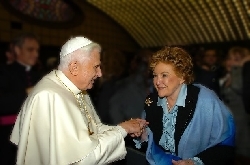 "It was inspirational beyond my ability to describe the experience."  That was the response of Pennsylvania Lieutenant Governor Catherine Baker Knoll, who was present at a special audience she received with Pope Benedict XVI.

"There are some moments in a person's life that are quickly elevated to the category of 'unforgettable.' The audience with His Holiness, Pope Benedict, instantly became one of those precious moments in my life."

"The Pontiff bestowed not only his blessing, but his best wishes to all the people of and . He has a profound belief that the world can achieve a lasting peace, and that message came through particularly strong during this season of the year."

A lifelong Roman Catholic, Lieutenant Governor Knoll had participated in similar audience in 2003 with The Great, Pope John Paul II.

To find out more about Lieutenant Governor Catherine Baker Knoll visit her website at www.ltgovernor.state.pa.us