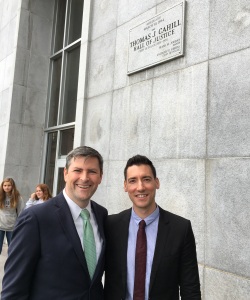 SAN FRANCISCO, Aug. 24, 2017 /Standard Newswire/ -- David Daleiden and his attorneys, including Thomas More Society Special Counsel Peter Breen, spoke to a supportive public following a hearing in the Superior Court of the State of California, County of San Francisco. Daleiden entered a plea of "not guilty," after a hearing on his demurrer, which objected to the validity of the complaint filed by California Attorney General Xavier Becerra against Daleiden. Judge Christopher C. Hite did not grant Daleiden's petition but, according to Breen, he did acknowledge that Daleiden will receive a hearing on his affirmative defenses at an upcoming preliminary probable cause hearing. Daleiden's primary affirmative defenses are, first, that the undercover recordings at issue were made in public places and, second, that he sought and uncovered evidence of illegal partial birth abortions and medical battery on women seeking abortions, bringing his recording efforts under the violent crime safe harbor in the California recording statute. "We're going to get a hearing on this," declared Breen, who called the charges weak and outrageous, adding that "This case should have never been brought."

The charges revolve around undercover videos made by Daleiden and colleague Sandra Susan Merritt during their research for the Center for Medical Progress. Becerra is accusing Daleiden of privacy violations, even though the film footage was shot in public locations, including restaurants and hotel conference rooms. The videos expose the alleged involvement of Planned Parenthood in trafficking aborted baby body parts.

"We remain very confident in a total victory for the pro-life side against Planned Parenthood and their allies in the California government," asserted Breen. Publicity surrounding the San Francisco criminal case has been fraught with allegations about close ties between Planned Parenthood, Beccera and his predecessor, now U.S. Senator, Kamala Harris. Both received thousands of dollars from the abortion provider for their political campaigns, and have been shown to collaborate with Planned Parenthood Affiliates of California, Harris going so far as to ask for support of the organization via her campaign website.

Breen addressed the overarching legal scenario, and mentioned a recent victory in Washington state, "David didn't just release these videos and stop. He is committed to ongoing research, some of which he is conducting through public records requests." The case Breen referred to was brought by University of Washington research lab employees and affiliated abortion facility personnel. They are trying to block release of information about their use of aborted human fetuses, at the school's taxpayer-funded Birth Defects Research Laboratory. Breen also mentioned charges brought against Daleiden and Merritt in Harris County, Texas, which he pointed out were spurious, and added that the California charges were even more so. The Texas cases were ultimately dropped. Breen also drew attention to the national movement to defund Planned Parenthood, provoked by the release of Daleiden's videos.