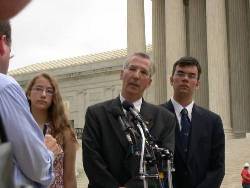 Sadly, the Homosexual Lobby has successfully coerced the California Board of Education to make homosexual history mandatory for all students. And parents are forbidden to option their children out from this radical indoctrination and these wrongful actions are in violation of federal laws.

Just one of many federal laws the California Board of Education is breaking with this decision -- thanks to the Hatch Act on Education Revised -- is that they are not obtaining written consent from parents to teach their children this type of perversion.

It is outrageous that the State of California will no longer allow any textbook for their young elementary classes that fails to wildly speculate about which historical figures "might" have been sexually perverse.

Today I am asking President Trump to order his Secretary of Education to enforce the law, and the children of California will once again escape the wrath of the Homosexual Lobby's indoctrination.

"Mr. President, I believe there is good reason to suspect,... that (California) Senate Bill 48
may violate various federal statutes and regulations... In November of last year, the California State Board of Education approved various instructional materials that it believed sufficiently discussed homosexuals and transgenders throughout history.

"...Mr. President, this is not 'education.'  It is brainwashing.  The clear intent of SB 48 is to indoctrinate young California minds into the perverted culture of homosexuality and so-called 'transgenderism,' in an attempt to make them believe that it is mainstream, and acceptable behavior...

"Fortunately, Mr. President, there may be a way that you can help intercede, in order to stop California school children from forced indoctrination into the homosexual and transgender lifestyles...

"The Family Educational Rights and Privacy Act of 1974, the Protection of Pupil Rights Act of 1978, the Pro-Children Act of 1994, and the Family Privacy Protection Act of 1995 each expanded protections for parents and students against controversial research and teaching by public schools across the nation...

"In conclusion, Mr. President, I write to ask you to order your Department of Education to investigate the current practices of the California public school system pursuant to HB 48, in order to determine whether any violations of federal law are occurring.  If there are such violations, I ask that you have your administration take whatever steps are necessary to cut off federal funding to these schools..."  said Delgaudio in his letter to the President.

A full copy of the 8 page letter to President Donald Trump is posted here on our website  at this link:
www.publicadvocateusa.org/library/PA_PDF_letter_to_Trump-Feb-1_2018.pdf