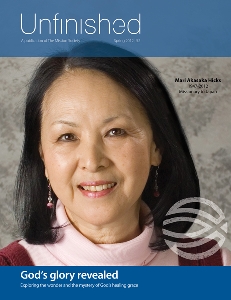 Many Healed, Others Not, but Divine Healing More Prevalent Than Realized, Especially in Two-Thirds World
Contact: Ty Mays, 770-256-8710; for The Mission Society
NORCROSS, Ga., May 21, 2012 /Standard Newswire/ -- The gospels are full of accounts of Jesus and His followers restoring the sick to complete health. But can people in the 21st century still encounter that same level of supernatural, miraculous, emotional and physical healing?
The resounding conclusion in this quarter's issue of "Unfinished," the magazine published by The Mission Society, is "yes." God still heals today, especially evidenced in less developed parts of the world. However, why some are not healed remains a mystery.
Subscription to "Unfinished" is free and available at www.themissionsociety.org/go/subscribetouf.
"As you'll see, we've not attempted to solve the mystery or answer all the questions," writes Dick McClain, president of The Mission Society, which sends Christian missionaries on ministry assignments worldwide. "Rather, we simply want to invite you into a conversation about a subject that at one time or another touches all of our lives. The fact is that around the world today, thousands of people are coming to faith in response to having personally experienced Jesus' healing power."
McClain shares testimonies of healing within his family. His mother, a missionary in India, was pregnant when she contracted the heart condition endocarditis, which in the 1950s was nearly always fatal. Neither she nor her unborn baby was expected to survive. Urgent appeals for prayer went around the world via telegrams. God answered the prayers. She gave birth, returned to the States, and five years later doctors found she had no heart damage, clearing her to return to the mission field. She's now 88, a living testimony to God's healing power, while the baby, McClain's brother Doug, just turned 60.
When McClain was pastoring his first church, a father brought his son, age 6, for prayer for his crooked feet. McClain remembers, "I was okay with praying for headaches and backaches and flu and so forth, but I was terrified about praying for crooked feet. That was serious stuff, and I was quite sure I wasn't up for it. …I mumbled some feeble words, knowing full well that nothing was going to happen. The next day his parents took him to the doctor who, upon examining the boy, said they should go buy some regular shoes, because his feet were straight," McClain writes.
Paradoxically, years later he prayed fervently for a young mother afflicted with melanoma. Though he had strong faith that God would heal her, a week later he preached her funeral.
People in the Two-Thirds World often have a heightened expectation for healing, and God seems to honor their faith. In the "Unfinished" article "Shouldn't we expect a miracle?" a missionary intern to Ghana lost his skepticism when God answered healing prayer for Ongala, a 27-year-old man born deaf and mute. After Christians in a village prayed, Ongala spoke for the first time in his life. His first word was "Yesu" – "Jesus" in his native language.
The article "Skeptics beware: A look at a worldview that may influence our own future expectation for healings" is an excerpt from "Miracles," a two-volume work by Dr. Craig Keener. The article "When the healing doesn't come" is missionary Hannah Duggins-Warf's report from the faith journey's bleakest terrain, describing her spiritual journey following the unexpected death of her father.
In the stories "Prayer that heals: Deploying teams of trained intercessors," and "Mission for the faint of heart: Wondering if God's power could flow through you?" U.S. congregations and short-term missionaries have seen miraculous responses to their prayers in Ukraine and Uganda.
This issue of "Unfinished" communicates that as believers wait for the consummation of God's kingdom, his glory is being revealed through miracles, healings and his people's faithfulness, even in the face of suffering. "And while I don't have answers for all the questions," said McClain, "I do know this: God is good and God is faithful, even when I don't understand."
Founded in 1984 in the Wesleyan tradition, The Mission Society exists to mobilize and deploy the body of Christ globally to join Jesus in His mission, especially among the least-reached peoples. To that end, The Mission Society recruits, trains and sends Christian missionaries to minister around the world. Its church ministry department provides seminars, workshops and mentoring for congregations in the United States and abroad, helping equip churches for outreach in their communities and worldwide. Its vision is for the Kingdom of God to advance among all peoples, bringing about redemption and reconciliation through Jesus Christ. At present, The Mission Society has more than 234 missionaries in 37 countries.