Franciscan Sisters February Meditation on Forgiveness at the Franciscanized World 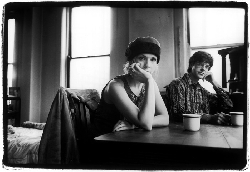 Commenting on his song, Detweiler offers that "Long Lost Brother... explores the theme of forgiveness, a word that comes up a lot in the music of Over the Rhine. Once you get beyond the surface, what is forgiveness all about? Is it possible to forgive yourself or anyone else without doing the work of understanding the dynamics of what you're attempting to forgive? The desire to forgive and the desire to gain wisdom seem increasingly inseparable."

Formed by husband-and-wife team of bassist/pianist/guitarist Linford Detweiler and vocalist/guitarist Karin Bergquist, Over the Rhine has drawn critical acclaim for their thoughtfully stirring music and spirituality.

The accompanying image of the Pieta is by photographer Nicole Bruni, who comments that "The Pieta has always been special to me because it illustrates so beautifully the culmination of faith, forgiveness, pain and redemption."

Franciscanized World was recently featured in Time Magazine's profile of Catholic religious orders innovatively utilizing the Internet. It invites visitors see the world as Saints Francis and Clare did - realistically, compassionately, finding good and holy possibility in the substance and culture of everyday life. Each month, specially selected songs and images are chosen for spiritual reflection from particular young women discerning their call in life.

"We want to present our life as a viable option for them. Personal invitation is always best; however, we became convinced that real conversations can begin by using the language of images and music." says Sr. Julie Ann Sheahan, OSF, Directress of Vocations