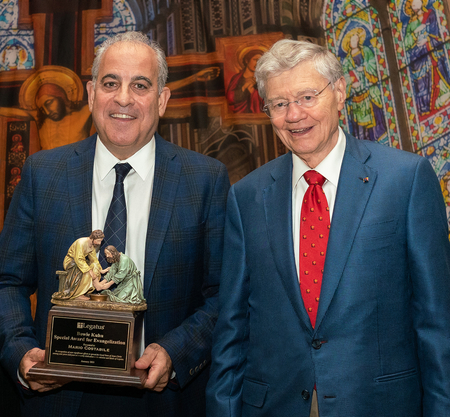 ANN ARBOR, Mich., Oct. 12, 2021 /Standard Newswire/ -- Legatus International has presented Mario Costabile with their 2020 Bowie Kuhn Award for Evangelization. Legatus is a membership organization of Catholic CEOs and presidents who have committed to study, live, and spread the Catholic faith.

At their September biannual Summit conference at The Phoenician resort in Scottsdale, AZ, Costabile was presented with the award by Legatus founder and CEO, Thomas S. Monaghan. The Bowie Kuhn Award for Evangelization recognizes a member's significant efforts to spread the good news of Jesus Christ among his/her peers and his/her noteworthy dedication to the mission and ideals of Legatus.

Mario and his wife, Susan, are charter members of the Legatus Newark Chapter. In 2018, Costabile earned the Legatus ACE (Northeast Region) award for his excellence in the recruitment of new members to the organization. Costabile is Founder and Executive Director of Array of Hope—a media company whose mission is to "reveal the 'Truths of our Faith' by creating high-quality films, music, and events. Seeking to address the decline of God in our culture, we are empowered with His grace to capture the hearts of families and awaken an inner desire to seek a relationship with Jesus Christ." According to Legatus President Stephen M. Henley, Costabile's commitment to advancing the Catholic faith and Christian ethics through media "distinguishes him among his peers and makes him a worthy recipient of the Bowie Kuhn Award for Evangelization."

Each year, the Regional Vice Presidents of Legatus nominate individuals for the Bowie Kuhn Award for Evangelization and the winning individual or couple is selected by a Legatus committee. Legatus consists of 100+ chapters throughout the U.S. and Canada and comprises over 5,000 members. The Newark Chapter of Legatus was chartered in 2018 and Costabile presently serves as the chapter president. In the Archdiocese of Newark, Cardinal Joseph W. Tobin is a long-time supporter of Legatus and its mission to create Ambassadors for Christ in the Marketplace; Fr. Sean Manson serves as the chapter chaplain.

Founded by entrepreneur and Domino's Pizza founder Thomas S. Monaghan, Legatus is focused on the commission which Pope St. John Paul II gave to the organization in 1988: "The world needs genuine witnesses to Christian ethics in the field of business and the Church asks you to fulfill this role publicly with courage and perseverance." By living out the Faith in their business, personal, and professional lives, Legatus members represent a powerful lay ministry in the New Evangelization and in the strengthening of the Body of Christ in accord with the teachings of the Church.