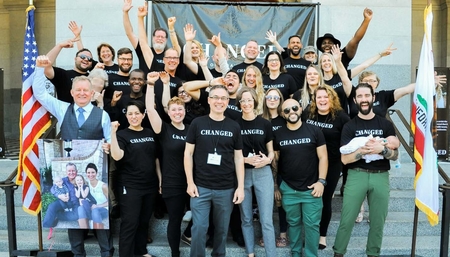 WASHINGTON, Oct. 28, 2019 /Standard Newswire/ -- "Formers" (those who no longer identify as lesbian, gay, bisexual, transgender, or questioning) representing every state in the Union have selected 15 Former LGBTQ people to travel to Washington, D.C. October 28 – November 1 to address concerns about LGBTQ-focused legislation such as bill H.R. 5, which passed in the House in May, and H.R 3570, which was introduced in late June.

Although dubbed "The Equality Act," Formers understand the bill is an unnecessary concession to the false idea that members of the gay community are marginalized. In fact, LGBTQ-identifying people have always had options in how they participate in broader culture. Nothing constrains them from participating in culture on a normal level. Unlike with the African American community, who have centuries of culturally driven abuse and forced destabilization, those who identify as LGBTQ have been empowered in our modern society as scientists, literary giants, and even politicians when they have chosen not to prioritize their sexual mores.

Meanwhile, H.R. 3570, dubbed the "Therapeutic Fraud Prevention Act of 2019," mirrors a similar bill proposed by California lawmakers but withdrawn by its author after heavy pressure from the state's religious leaders, including Church United and Formers. Written by California Congressman Ted Lieu, the bill would ban conversion therapy nationwide and prohibit any advertising referencing to the ability to change or reduce sexual orientation or gender identity. The House resolution further minimizes the lives of thousands of Formers by declaring "there is no scientifically valid evidence that supports the practice of attempting to prevent a person from being lesbian, gay, bisexual, transgender, or gender nonconforming" adding that conversion therapy is "substantially dangerous to an individual's mental and physical health, and has been shown to contribute to depression, self-harm, low self-esteem, family rejection, and suicide."

America does not need anti-discrimination laws or bans against treatment for those seeking to live out their faith biblically; we need a renewed belief in the dignity and beauty of all of humanity in its diversity. America CAN model for the world what it looks like to value one another despite our differences without government intrusion or enforcement.

Bills like H.R. 5 will impact the private, public, religious, academic and government sectors. This proposed law would change the existing Civil Rights Act to redefine "sex" as gender identity and sexual orientation among the list of classes (e.g., race, color, religion, sex and national origin). There would be NO exemptions for individual believers or faith communities. H.R. 5 will empower the Federal Government to levy punishment on any individual or organization with a dissenting ideological view. It is the beginning of the end of religious liberty and free speech in America.

For Formers, bills like H.R. 5 and H.R. 3570 block our rights to follow our own convictions. It enforces the false belief that one cannot change and that one has no choice but to embrace LGBTQ identity and behaviors.

"Honestly, my life has been changed because I was able to be open about my struggle with the LGBTQ identity. Through counseling and other avenues, I was able to process through rape, abuse and gender identity. If I had not had these options I might not be alive today! Now I am on a path of Faith and Freedom."

"If this bill would become law, we will not be able to build our organization, Fearless Identity, that brings hope and understanding to the LGBTQ communities and the church through education and biblical teaching. We support a judgment-free environment for anyone that wants to seek change, and the freedom to do so without fear of retribution or lawsuits because LBGTQ change is possible."

"I support every persons' right to choose their own course of life which often requires them to make personal changes in their core beliefs and lifestyle. Following Jesus is no different.

'......If anyone would come after me, let him deny himself and take up his cross and follow me.' Mark‬ 8:34‬ ESV‬‬‬‬‬‬‬‬‬‬

"This bill is reverse discrimination, imposing LGBTQ community values upon all Americans, especially upon the churches of all denominations, who for centuries have offered hope to everyone who desires a life change to serve their God. Life is all about choices, even in our sexual orientation."

"As someone who used to live in and relate to the world around me as a man—yet identified as a lesbian—I am thankful I had a choice to refuse the LGBTQ label and get the help I needed to align myself with my Christian faith. I don't want these rights taken away from others like me."

"Vulnerable people deserve care. Individuals who struggle with their sexuality and self-perception around their gender deserve informed, compassionate attention of their choosing. I oppose H.R. 5 because, in the end, it would limit care and resources for people who want a particular type of assistance with these struggles. Making laws around ideologies and self-perceptions, rather than innate qualities like biological sex and race, sets a dangerous precedent. By infringing on other freedoms, particularly religious freedoms, this bill harms — even while it claims to help. I oppose this bill for the ways it would harm people whose stories are like mine and so many others I know."

Jim Domen, a former homosexual and Pastor/Founder of Church United in California, decried:

"Sexual behavior should not be a protected civil right. Changing the Civil Rights Act would create a super class for anyone identifying as LGBTQ, usurping everyone else's rights who are not LGBTQ or who disagree with the lifestyle because of religious beliefs. Ask anyone from a Super Minority (e.g., Formers) about the persecution, ridicule, and abuse they have encountered for changing previous behaviors/lifestyles in America. As currently proposed, H.R. 5, the 'Equality Act,' discriminates against Formers or others who practice a different sexual behavior than LGBTQ individuals.

"H.R. 3570 prohibits choice of therapeutic direction from a client – 'I CHOSE not to be gay and my therapists helped affirm the direction I chose toward heterosexuality' – this bill would deny anyone like myself from seeking freedom and help from licensed professionals. My psychological well-being as a heterosexual man and my family, are proof that the therapies I received were not fraudulent. My wife, biological daughters and son are not frauds."

For news conference details, inquires or media interviews with Former LGBTQ individuals from a specific state or evangelical bishops/pastors please contact Desare Ferraro at (714) 348-0808 or Desare@ChurchUnited.com. Photos and biographies of the 15 Formers are available upon request.

Church United with the CHANGED Movement (changedmovement.com) are California based non-profit organizations partnering together to protect the freedoms of Former LGBTQ identified individuals who have CHANGED. In 2018, both organizations took key roles in a strategy that used personal stories to preempt the enactment of pseudo-communistic philosophical legislation in California's and Taiwan's governments. Recent SOGI (Sexual Orientation, Gender Identity) legislation has been authored by American legislators of Chinese descent: California’s A.B. 2943 (withdrawn in August 2018) by gay Assemblyman Evan Low; and S.B. 1172 (passed in 2012 and sponsored by then CA State Sen. Ted Lieu) and H.R. 3570 authored by Representative Ted Lieu (D-Torrance). Interestingly, Low and Lieu are both of Chinese descent (Taiwan, Province of China). Church United and 5 members of the CHANGED Team (including two Former LGBTQ Pulse Nightclub shooting survivors) will be flying to Wasington, D.C. directly from their tour in Taipei, Taiwan. In Taipei, 30 formerly LGBTQ identifiied people (Referred to as Rainbow Crossers in Asia) representing 30 nations petitioned an audience at the International Federation of Human Rights Conference, October 21-25. Their admittance to the IFHR as a people group was denied.