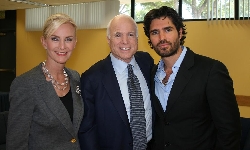 LOS ANGELES, October 28 /Standard Newswire/ -- Jon Voight, Dennis Miller and Norm Macdonald aren't the only entertainers who voiced support of John McCain for president. Eduardo Verastegui, the producer and lead actor of the award-winning film Bella, announced his endorsement at a Colorado McCain-Palin rally on October 15.

Reaching out to Latino voters, Verastegui says, "I am endorsing John McCain for president because of his commitments to end abortion, protect traditional marriage and reform immigration fairly."

He reminded the crowd that more than 45 million babies have been killed by abortion in America since the Supreme Court's Roe v. Wade decision in 1973.

Verastegui said, "We need to put an end to abortion and political candidates play a very important role in this matter. More than 200,000 Latino babies are killed by abortion each year in the USA. This holocaust must end. That's why we must elect John McCain. He will defend and protect the most innocent of his country, the beautiful babies in their mothers' wombs."

After the rally, Verastegui met with McCain, saying, "Senator, thank you for your commitment to life. I'd like to give you something. Here is a Miraculous Medal blessed by Pope Benedict XVI."

Verastegui recalls, "Sen. McCain said, 'Thank you so much!' Then he reached into his pocket and took out a Blessed Mother Teresa medal that he always carries with him. He said, 'Eduardo, now I am going to keep both of these with me everywhere I go.' I also gave a Miraculous Medal to Mrs. McCain."

"I was touched when I found out that the McCains adopted one of their daughters from Mother Teresa's orphanage in India. There is nothing more beautiful than to give children homes with families who will love them. I hope that one day that I can do the same."

Verastegui believes that unless Americans elect a president who will defend fundamental human rights, no one can expect a sound economy, health care or national security, including immigration reform.

He says, "I can make hundreds of movies like Bella and save babies, but it's never going to be as powerful as a president nominating judges who observe constitutional law. John McCain promises to do this and it is crucial since we are just one Supreme Court justice away from overturning Roe v. Wade.

"On the other hand, Senator Barack Obama is pro-abortion and he has vowed to codify the Roe v. Wade ruling by signing the proposed Freedom of Choice Act. It would strip Americans of their right to protect innocent human lives, even from the savagery of partial-birth abortion, during which the abortionist pulls a baby from his mother's womb, stabs his skull and vacuums out his brains."

On immigration, Verastegui says, "I'm grateful to this country for opening the door to my dreams. The United States has been such an amazing blessing in my life and this nation has been a blessing to all immigrants, especially the Latino community.

"However, Obama doesn't represent the values of our Latino community. He has never done anything for us. He doesn't know who we are.

"I am convinced that McCain not only knows who we are, but that he cares about us. When we discussed immigration, he praised Latinos and other immigrants for making important contributions to America. He also talked about his plan for fair reform - reform that includes protecting America while treating all immigrants and their families with dignity.

"My question is this: Where was Obama when the McCain-Kennedy immigration reform bill was moving through Congress? Obama abandoned the Latino community because he did not want to hurt his political career.

"On the contrary, McCain took a big risk for us. Even though Sen. McCain has realized the need for further reform and revised his immigration plan, he has character - the heroic character to put his country and others first.

"Obama speaks about 'change,' but what change are we talking about? Fidel Castro spoke about change in Cuba. Hugo Chavez talks about change in Venezuela. Others were charismatic well-spoken dictators who promised change, but look what happened to their countries.

"Sen. McCain is the real change we need. He is a real American hero and the leader we need to change and improve the direction of this great country."

Verastegui says, "The right to life is the most important thing to me, so I want to do whatever I can to support the best candidates. That's why I support John McCain and Sarah Palin. That's why I ask all Americans, including Latinos, to vote for them."

Download Eduardo Verastegui's new English and Spanish videos about the sanctity of life and Obama's pro-abortion agenda for free at ObamaMustSee.com and DuraRealidad.com.

Commentators are available for English and Spanish interviews.