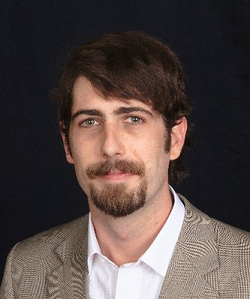 COLUMBIA, S.C., March 8, 2021 /Standard Newswire/ -- On December 25, 2020, Frontline Ministries, Inc., and the Exodus Mandate Project announced the selection of Alex Newman (pictured) as the recipient of the 2020 Dr. Robert Dreyfus Courageous Christian Leadership Award. Established by Frontline Ministries, Inc., in 2007, this award is presented annually to recognize and honor Christian leaders who have exhibited moral courage through their unique contribution to the Church by advancing Christianity in the culture and life of the nation. This contribution may run counter to the prevailing culture of the Church and society. E. Ray Moore, founder and director of Exodus Mandate, personally presented the award to Alex on March 6, 2021 in Orlando, Florida, at a private reception hosted by Exodus Mandate and Dran Reese, president of Public School Exit.

Alex Newman is an award-winning international journalist, educator, author, and consultant. In addition to serving as president of the small media and information consulting firm Liberty Sentinel Media, Inc., he has written for a wide array of publications in the United States and abroad. He currently serves as a contributor to World Net Daily (WND), FreedomProject, The New American, and Crisis and has written for numerous other newspapers and magazines. His work has been featured at Drudge, Breitbart, Fox News, and many other outlets. His articles have been published in major newspapers across America.

Alex has authored and co-authored several books. One of his major works was an exposé of government schools with the late Dr. Samuel Blumenfeld, called Crimes of the Educators: How Utopians are using government schools to destroy America's children, published by WND Books. It was endorsed by conservative leaders ranging from Phyllis Schlafly to Ron Paul. Alex has presented his book on hundreds of radio and TV networks, including Newsmax, One America News, the Dove Network, the Christian Television Network, and the SonLife Broadcasting Network.

Alex also serves as a director for the organization Bear Witness Central, which works to protect and preserve the U.S. Constitution by educating the public in partnership with other conservative organizations. He is executive director of the newly formed Public School Exit (PSE) organization. Dran Reese, president and CEO of PSE stated, "Alex Newman has done a great service to our country researching, writing and speaking about public education in America, its history and its future. He defines a new vision of excellence in education and is leading with brilliance." In addition, he serves on several advisory boards for education-focused organizations, including U.S. Parents Involved in Education (USPIE), and the Samuel L. Blumenfeld Foundation for Literacy. He is also a Leadership Fellow at the James Madison Institute, Florida's premier free-market think tank.

In education, Alex serves as the executive editor of G. Edward Griffin's newly formed Red Pill University. For the last seven years, Alex has also been teaching advanced economics to some of America's brightest high-school seniors through Freedom Project Academy, an accredited K-12 school offering a classical education based on Judeo-Christian values. He also has an education blog called The Newman Report. Before that, Alex was the top-performing field representative for the Leadership Institute, where he worked organizing conservative student groups and publications while recruiting young conservatives into the movement. Alex wrote six articles in a special education report entitled Rescuing Our Children for the New American magazine published Feb. 4, 2019. Later in 2019, he toured the nation for four months, presenting his keynote message, Rescuing Our Children – and Our Nation. Alex reported, "This indoctrination system masquerading as education has become a threat to everything we hold dear," adding that conservatives and Christians would lose every political battle if they continue handing their children over to the government to be indoctrinated. "Our families, our churches, our freedoms, and our nation are all facing an existential threat."

Alex has a Bachelor of Science degree in journalism from the University of Florida with an emphasis on economics and international relations, as well as an A.A. degree in foreign languages from Miami-Dade College.

Alex is a frequent guest on national and international radio shows, and has been on many of America's top programs including The Savage Nation with Michael Savage, Janet Mefferd Today, Phyllis Schlafly's Eagle Forum Live, Phyllis Schlafly's Eagles show, and many more. He is also a frequent speaker on TV programs and at conferences, together reaching tens of millions of people. Chaplain E. Ray Moore, president of Frontline Ministries, Inc., and director of the Exodus Mandate Project noted, "I believe Alex Newman is the dynamic force for K12 Christian education and homeschooling for this generation."

Alex is happily married and has five children. Along with his family, he currently divides his time between various locations in Europe and the United States.

Dr. Robert Dreyfus, for whom this award is named, is a prominent retired Florida dentist and inventor of a device to relieve neuromuscular pain for dental use. He served as president of the Florida Dental Society of Anesthesiology. He has given more than 50 years of volunteer work on behalf of family values and K-12 Christian education in Florida and has served as the Florida state coordinator for the Exodus Mandate Project from November 2004, until his recent retirement in 2019. Dr. Robert Dreyfus was also present at the award ceremony.