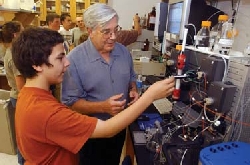 Not the 19th century version, but a virtual schoolhouse with laptops and Webcasts that can connect students even in remote areas to 21st century learning.

Rural students are at risk of being left out of the latest technological advances, educational opportunities - and jobs, said , a biochemist who directs the Center for Matrix Biology at .

Photo: Billy Hudson, Ph.D., shows Chris Cox, an eighth-grade student visiting from Grapevine, , equipment used in his lab to separate molecules for purification. Cox was part of a group of students from Grapevine who spent a week at Vanderbilt last summer. Photo by Dana Johnson

"But there is a path to enhanced opportunity," he said. "I would like to capture that path, and give them hope and understanding."

On April 10, Hudson and his team of science educators will launch the Aspirnaut Initiative, a unique science education program in Sheridan, Ark., about 30 miles south of Little Rock.

About 15 "high ability" middle and high school students will receive laptop computers, then board a bus equipped with broadband Internet access via cell phone towers.

Their destination: the fellowship hall of the Sardis Missionary Baptist Church in the tiny Grapevine community, where they will participate in a two-way Webcast organized by the Vanderbilt Center for Science Outreach, which is partnering with Hudson, Sheridan Schools and the Grapevine Historical Society on the initiative.

The April 10 launch, partially funded by VUMC and private donations, will test the feasibility of using unique approaches to bring technology to isolated areas, said Hudson, who grew up in Grapevine.

Eventually the Aspirnauts, students who "aspire, seek and achieve," will log in to their lessons during their usual lengthy bus rides, up to 90 minutes each way, along circuitous routes on gravel roads to and from their regular schools.

On Saturdays, evenings or during the summer, they will meet at the church for Webcasts and Internet access they don't have at home due to their remote location.

The Aspirnaut Initiative has been endorsed by Arkansas Gov. Mike Huckabee and by distinguished scientists around the world, including two Nobel laureates. By improving K-12 education in rural areas, said , the initiative can help the retain its stature as a math and science powerhouse.