A peculiar statement recorded by Moses 3500 years ago has made no sense to anyone until NASA space telescope discoveries were made in 2004-2007 about how planets like Earth form from a formless cloud of dust just as Genesis indicates. 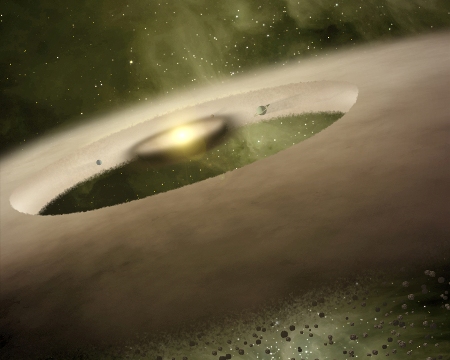 CLEVELAND, Sept. 11, 2019 /Standard Newswire/ -- According to NASA 2004-2007 discoveries, planets like the Earth are formed in the exact same fashion as described in Genesis, according to author J. Paul Hutchins.

While doing research for his book, Hubble Reveals Creation by an Awe-Inspiring Power, Hutchins discovered that NASA scientist have learned that planets form around infant stars inside a protoplanetary disc of dust and debris, starting out in a formless and chaotic state in total darkness, hidden from the sun, as described by Moses.

This scientific data about planet formation was not available to Moses when he wrote the book of Genesis millennia ago. Interestingly though this new data lines up perfectly with a peculiar statement he recorded, according to the author.

Genesis 1:2, states, "Now the earth was formless and desolate, and there was darkness upon the surface ….". Genesis 1:3 And God said. "Let there be light." Then there was light.

NASA's discoveries on protoplanetary disc, show planet's accrete in total darkness from a formless cloud of dust. The data that was gathered in 2007 in which scientists reportedly discovered a star system called UX Tau A that was in the Taurus constellation. The UX Tau A star system had planets formed from "leftover waste and debris from their central star". Those planets like earth, in their early stages were in a "formless and chaotic state in total darkness."

NASA's scientists have discovered that as planets mature inside their dusty cocoon, they suck up all the dust between them and the sun so that the planets emerge from darkness into the light.

This NASA / JPL produced video made from the discoveries by the Spitzer space telescopes in 2004 in the star system CoKu Tau 4 simulates what Genesis appears to describe of how the Earth was formed in darkness and how light appeared from the sun once the planet matured, making the already existing Sun, Moon, and Stars visible from Earth.

What Moses stated at Genesis 1:2, 3 was perfectly depicted (based on NASA's discoveries) in the video, "Formation of the Solar System" produced by Theoretical Physics, Stephen Hawking, and the Discovery Channel in 2011.

According to Hutchins, "when you read Genesis using the original Hebrew wording for "day" it becomes evident that the 6 creative days spoken of by Moses are figurative, and not literal 24-hour days as some religious scholars believe. In the Hebrew language the word "day" ('yowm') can be used in a literal and in a figurative or even symbolic sense depending on the context. For example in Genesis 2:4 it speaks of, "in the day God made heaven and earth", indicating that the word day is figurative.

Based on this information and NASA's scientific data on planet formation, the 6 creative days of Genesis appear to be symbolic and likely represent thousands, or even tens of thousands or more years each in which the earth would have been in its finial forming phases that produced living plants, animals, and humans".

According to NASA's data, planets like earth form in a fashion that corresponds with what was recorded in Genesis. This discovery, despite personal opinions of the bible's origin appears to clear up a misconception by some bible scholars that the Earth was created in six literal days, before the Sun, and Stars existed.

This new data provides convincing scientific evidence that supports the Genesis account about the formation of earth to be scientifically accurate and adds to the bible's authenticity.

Without a space telescope, how else could Moses have had such advanced and accurate astronomical insight, other than from divine inspiration?