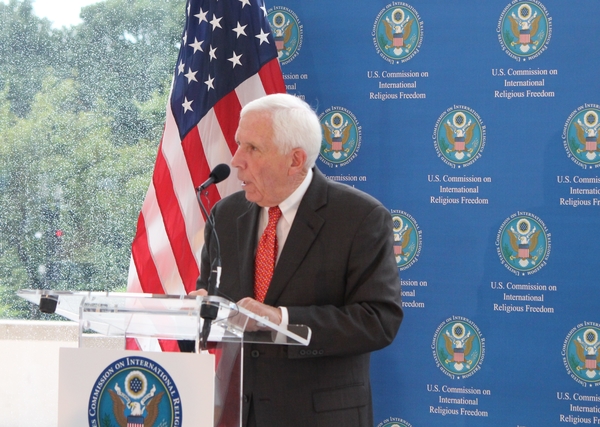 NEWS PROVIDED BY
Coptic Solidarity
May 18, 2022

Mr. Wolf is one of the most respected and well-known champions of international human rights and religious freedom. He served in the U.S. House of Representatives for 34 years and was co-author of the International Religious Freedom Act of 1998 (IRFA 1998). This landmark legislation created the USCIRF, as well as the Office of International Religious Freedom at the State Department, mandated annual reporting, and provided the structure and tools for the US government to promote religious freedom as an integral part of foreign policy.

As Chair of the Tom Lantos Human Rights Commission, Mr. Wolf has a record of bi-partisan partnership in his human rights work and has advocated for persecuted minorities of numerous faith groups without prejudice. In recognition of his extensive championing, the House of Representatives voted unanimously to pass an amendment to the IRFA 1998 in 2016 and named it the Frank R. Wolf International Religious Freedom Act.

Coptic Solidarity President, Mrs. Caroline Doss remarked, "Mr. Wolf has been one of the most staunch advocates of Coptic equality and religious freedom for all Egyptians. We look forward to partnering with him and the important work he will do with the USCIRF to further promote religious freedom in Egypt."

Mr. Curry was appointed CEO of Open Doors USA in August 2013 and has become an advocate for persecuted Christians worldwide in this role, traveling extensively and advocating for them in Washington, DC. He comes with a background serving as the president of various charities working on behalf of homeless and neglected children worldwide.

The U.S. Commission on International Religious Freedom (USCIRF) is an independent, bipartisan federal government entity established by the U.S. Congress to monitor, analyze, and report on religious freedom abroad. Commissioners are selected by the President, two by the leaders of the President's party in Congress, and four by the congressional leaders of the party not in the White House. Commissioners are appointed for two-year terms and are eligible for reappointment.

Coptic Solidarity is an organization seeking to help minorities, particularly the Copts of Egypt. We support those in Egypt working for democracy, freedom, and the protection of the fundamental rights of all Egyptian citizens, and advocate in cooperation with the affiliated organizations in Canada and in Europe (Solidarité Copte). For more information, contact Lindsay Rodriguez at 801-512-1713 or coptadvocacy@copticsolidarity.org.