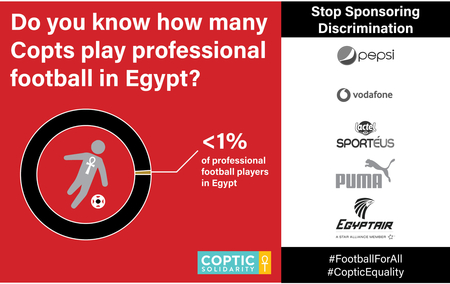 WASHINGTON, Sept. 21, 2020 /Standard Newswire/ -- Coptic Solidarity (CS) strongly urges all corporate sponsors of the Egyptian Football Association (EFA) and the Premier League to end their sponsorship of Egypt's national football team and league teams until they take immediate steps to end rampant discrimination against Coptic and other minority faith footballers.

CS recently sent letters to the corporate sponsors of the EFA and Premier League, informing them of this discrimination and how it is conducted; CS also shared a report with extensive documentation of individual cases and recommendations that these corporations urge the EFA and Premier League to implement. These primary sponsors include: Egypt Air, Egypt Foods Group, Etisalat, GLC Paints, Lactel, Kasrawy Group, Oppo, PEPSICO, Presentation Sports Media, PUMA, Saib Bank, Telecom Egypt, and Vodafone. In accordance with FIFA's Code of Ethics and Good Practices Guide, Coptic Solidarity urges these corporate sponsors to end their sponsorship unless the below conditions are met, prior to the upcoming 2021 Olympics and next World Cup.

In September 2018, CS published a report, Discrimination Against Copts in Egyptian Sport Clubs, which is the first extensive documentation of discrimination against individual Coptic footballers. The report was submitted to FIFA and to the IOC. Due to their lack of action, CS launched two online grassroots campaigns, one targeting FIFA, and the other addressed to the Normalization Committee Members of the EFA. CS continued coordinating with FIFA throughout 2020 by online meetings, during which they reported some positive actions to address our complaints. However, the EFA has yet to implement any action to end discrimination against Coptic footballers which is in direct contravention of article 4 of FIFA's Statutes.

FIFA has a duty to uphold its policy of anti-discrimination for member associations and to take appropriate action to ensure that the EFA ends discrimination against Coptic athletes. This is an opportunity for the international business community to utilize their influence and resources to advocate improved civil rights and equality for minorities in Egypt.

The Egyptian Olympic Mission to China and Brazil, in 2012 and 2016 respectively, were completely devoid of Copts; same too the Egyptian National Team at the 2018 World Cup in Russia. Not a single Copt can be found on either the main team, reserve, or youth team. There are currently 540 players in the top-flight soccer clubs in Egypt; only one is a Copt—despite the fact that Copts comprise at least ten percent of Egypt's population. During the past half-century, an infinitesimally tiny number of Coptic footballers—at most six— have managed to join topflight soccer clubs. These dismal statistics need amelioration.

Coptic Solidarity is an organization seeking to help minorities, particularly the Copts, of Egypt. We support those in Egypt working for democracy, freedom, and the protection of the fundamental rights of all Egyptian citizens, and advocate in cooperation with the affiliated organizations in Canada and in Europe (Solidarité Copte). For more information, contact Lindsay Griffin at 801-512-1713 or coptadvocacy@copticsolidarity.org.