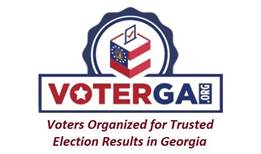 ATLANTA, June 23, 2022 /Standard Newswire/ -- VoterGA today announced a challenge for the Republican Secretary of State's (SOS) race in Georgia's May 24, 2022 primary election. All 159 counties are named as Respondents in the contest, that was filed in Spalding County by VoterGA's co-founder Garland Favorito and attorney Todd Harding. Georgia law allows the same charge against multiple counties to be heard in the jurisdiction of one county. The contest alleges the Dominion vote count for the Secretary of State (SOS) race is not accurate and that incumbent SOS, Brad Raffensperger, certified unlawful results when he declared himself the winner of the primary with 52% of the vote in a four-way race including Jody Hice, T.J. Hudson and David Belle Isle.

The contest seeks to unseal the ballots to determine the accuracy of the results and alleges that all counties violated Open Records Request (ORR) law by failing to honor Mr. Favorito's ORR for an electronic copy of the actual ballots. Actual ballots are needed to verify election results because VoterGA found the Dominion ballot images required to produce 2020 Fulton County election results were electronically altered prior to certification. VoterGA also announced that 81 counties failed to provide correct, signed certifications for the  primary, including 73 that never responded to another ORR Favorito submitted to get the public certificate.

The contest cites evidence collected from a VoterGA monitoring team during a June 6 Cobb Co. hand count audit. The team monitored most Election Day ballots in the Vinings 04 precinct and found Raffensperger received about 53% of the Republican Election Day SOS votes while the Dominion voting system awarded him 68.4% of those votes. Thus, the Dominion software attributed about 15% more votes to Raffensperger's electronic totals than the actual paper ballots seem to show. Since county tabulators are prepped centrally under the jurisdiction of the SOS office and vulnerable to a single point of attack, there is a significant risk that all tabulators statewide awarded extra votes to Raffensperger which helped him avoid an expected runoff.

Georgia counties have experienced several counting problems with the Dominion voting system in the 2022 primaries. An election night graphic of results originally posted by the SOS office showed Georgia's voting system allocated 3,317 votes to a Fulton County School Board District 7 candidate who was NOT on the ballot! That same graphic showed candidate Phil Chen with zero votes at 10:12 on Election Night even though he actually received 49.7% of the vote in the race. Chen has challenged the outcome of that race.

In DeKalb County, District 2 Commission Democrat Party candidate Michelle Long-Spears received zero votes in the precinct where she and her husband live. After she complained, the Elections staff attempted to perform a machine recount that failed and finally conducted a hand count audit of the race. It showed the Dominion system shorted Long-Spears 2,000 votes, failed to count 1,800 more and gave nearly 1,500 votes to a candidate who did not earn them.  The hand count audit found the Dominion Democracy Suite 5.5 voting system selected the wrong winners to face each other in a runoff.

Favorito added: "The Dekalb District 2 Commission race was the only candidate race to be audited and it found the electronic vote totals were completely wrong. No complete race has been proven to have correct results, so the Dominion voting system is now shown to have a 0% accuracy rate in the 2022 primary."

VoterGA is a non-partisan, 501(c)3 registered non-profit organization created by a coalition of citizens working to restore election integrity in Georgia. We advocate for independently verifiable, auditable, recount capable and transparent elections.