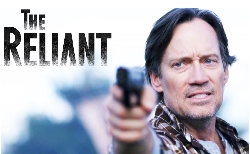 DRESDEN, Ohio, Nov. 21, 2017 /Standard Newswire/ -- It's almost like the makers of The Reliant want to be controversial.

Faith-based filmmaker and family practice physician Dr. Johnston has produced a full feature action movie starring Kevin Sorbo (Hercules), Brian Bosworth (The Longest Yard), and Eric Roberts (The Dark Knight), and to promote the movie they're giving away an AR-15.

He personally owns the DPMS AR-15 5.56/.223 caliber rifle that was used by actor Blake Burt in The Reliant.

Didn't he know an AR-15 was the type of rifle carried by the murderer who killed 26 in a Texas church recently? Why in the world would he give away such a rifle in the wake of this horrible tragedy?

As reported by the L.A. Times, the plumber's daughter reported hearing gun shots from the church next door. He grabbed his AR-15 and engaged the mass murderer, shooting him twice. The criminal dropped his weapon, fled in his car and died on the side of the road soon thereafter.

"Who knows how many Sunday services the murderer would have visited if it weren't for the courage of Stephen Willeford," Dr. Johnston says. "But his courage wouldn't have amounted to much more than a brave death if it weren't for the Second Amendment. Our forefathers knew that arms in the hands of the law-abiding was necessary to protect against criminals and tyrants. That's why they secured this right in the Bill of Rights, and required our leaders to take an oath to uphold and defend it."

The Texas murderer should not have been allowed to purchase his AR-15 based upon existing laws. Being convicted of domestic violence, he already was legally forbidden to own a firearm.

"This brings to mind the bumper-sticker adage," Dr. Johnston reminds me, "If guns are outlawed, only outlaws will own guns."

The precipitating crisis in The Reliant is the collapse of the dollar. Widespread rioting and looting leaves a 19-year-old lovesick girl struggling to care for her younger siblings in a stretch of woods on the outskirts of their burning town, wondering why a good God would let this happen.

"Although there is a message of redemption through faith in Jesus," Dr. Johnston says, "The Reliant is subtle, yet relevant and winsome in its defense of the right to keep and bear arms."

Their website TheReliantMovie.com gives what someone must do to win the AR-15: answer five trivia questions about the movie, answers found on their facebook page. They will award the rifle on Christmas Day, and ship it via a dealer with a Federal Firearms License.