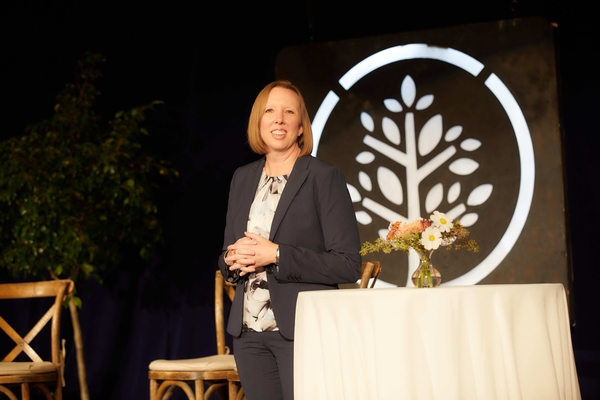 "As Show Hope's Founders, we along with the Board of Directors and staff fully support Kristin as she takes the helm as Executive Director this spring," Mary Beth and Steven Curtis Chapman said. "Kristin is a humble, steadfast, and wise leader who is ready for the task that God has appointed for her, and we await with great anticipation to see where He leads her and Show Hope."

With a background in accounting and operations, Parks came to Show Hope as Senior Director of Finance and quickly transitioned to her current role, where she and Executive Director Emily Chapman Richards forged a strong working relationship and friendship. Through a season of transition, with Richards by her side, Parks will be well positioned to lead Show Hope into the future.

"Kristin has been a right hand of support to me over the past few years, but most importantly, she is a trusted confidant and friend," Richards said. "God has been gracious to allow us together to play a part in planting many 'new seeds' at Show Hope that, I know, will bear much fruit in the years to come."

After a season of prayerful reflection and wise counsel, Richards has decided to step down as Show Hope's Executive Director—a move that she describes as "the next right step of faith for her and her family."

"This is certainly a bittersweet time for us and the entire Show Hope staff," the Chapmans said. "Yet we are trusting God's will for Emily, and we are incredibly proud of this brave choice she and her husband, Tanner, have made, ultimately, for God's glory and their three beautiful girls.

"As only God can, He has faithfully provided for Show Hope's next season with Kristin," the Chapmans continued. "And we are excited that she accepted our invitation to serve as the organization's newest Executive Director."

While Richards is officially ending her tenure as Show Hope's Executive Director, she will remain in an advisory and ambassador capacity for the organization.

"I am thankful for Emily's leadership, for our partnership over the years, and for our friendship," Parks said. "I am fully supportive of Emily and her decision, and I am proud to see her following God's direction for her life. I look forward to continuing in this work together.

"To Mary Beth and Steven, your support, encouragement, and the confidence you have helped instill in me are appreciated in ways words cannot express," Parks continued. "Thank you for your trust in me in leading the next chapter for Show Hope. I look forward to working together in the days to come."

Originally from Southern Illinois, Parks has called Tennessee "home" since her days at Union University where she earned a degree in accounting. Before coming to Show Hope in 2019, Parks served Lifeway Christian Resources for 15-plus years. She is also a Certified Public Accountant (CPA) with experience in accounting, auditing, finance, and operations.

Since its founding, Show Hope has provided more than $34.5 million in Adoption Aid grants, impacting more than 7,900 children from 62 countries, including the U.S. In the past year, the nonprofit has also awarded more than $100,000 in Medical Care grants to 30 families who have adopted children with healthcare needs. Through its Pre+Post Adoption Support efforts, Show Hope has provided tools and resources for more than 110,000 families, individuals, and professionals to care for children with complex needs. And as of 2021, more than 22,500 students have been engaged through Show Hope's Student Initiatives program.

About Show Hope:
The faith-based nonprofit exists to care for orphans by engaging the Church and reducing barriers to adoption. Show Hope’s efforts have helped thousands of children come to know the love and permanency of a family while mobilizing individuals, families, and students to care holistically for children who have been orphaned. To learn more about Parks and the work of Show Hope, visit ShowHope.org.