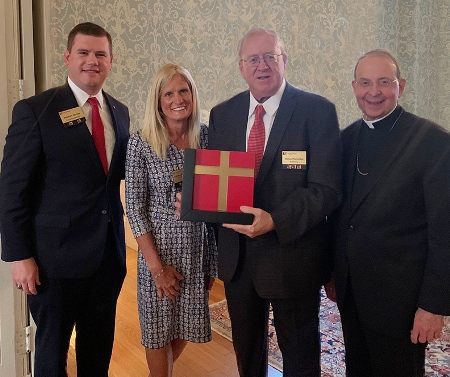 Photo: From left, Legatus Executive Director Stephen Henley with Ambassador of the Year Award recipients Stephen and Deborah Peroutka and The Most Reverend William E. Lori, Archbishop of Baltimore.

NEWS PROVIDED BY
Legatus International
May 24, 2021

ANN ARBOR, Mich., May 24, 2021 /Standard Newswire/ -- Legatus International has presented Stephen and Deborah Peroutka with their annual Ambassador of the Year Award. Legatus is a membership organization of Catholic CEOs and presidents who have committed to study, live, and spread the Catholic faith.

At a monthly meeting of the Legatus Baltimore Chapter on Wednesday, May 19, the award was given to the Peroutkas by The Most Reverend William E. Lori, Archbishop of Baltimore, and Legatus Executive Director, Stephen M. Henley. The AMBY is Legatus' most prestigious award, recognizing the Legatus member(s) who has demonstrated outstanding Christian witness to his/her company or the broader community.

Award recipients Steve and Debbie Peroutka are members of the Legatus Baltimore Chapter. Steve Peroutka has served as Chapter President since 2019. In her acceptance of the AMBY Award, Debbie remarked, "We are all called to get to heaven and Legatus helps us achieve that!" The Peroutkas are active in all aspects of Legatus, both at the local and national level, and according to Henley, "Steve and Debbie embody what it means to be Legatus members. Wherever they are, they share their faith and the Legatus mission with joy and enthusiasm."

Each year, the Regional Vice Presidents of Legatus nominate individuals for the AMBY Award and the winning individual or couple is selected by a committee at Legatus. Having chartered three new chapters (Albany, Ft. Lauderdale, and Miami) in 2020, Legatus consists of 100+ chapters throughout the U.S. and Canada and comprises 5,000+ members. The Baltimore Chapter of Legatus celebrated its 15th anniversary in 2020. Archbishop Lori is an avid supporter of Legatus in the archdiocese; Fr. Steven Roth, the Diocesan Vocations Director, serves as the chapter chaplain.

Founded by entrepreneur and Domino's Pizza founder Thomas S. Monaghan, Legatus is focused on the commission which Pope St. John Paul II gave to the organization in 1988: "The world needs genuine witnesses to Christian ethics in the field of business and the Church asks you to fulfill this role publicly with courage and perseverance." By living out the Faith in their business, personal, and professional lives, Legatus members represent a powerful lay ministry in the New Evangelization and in the strengthening of the Body of Christ in accord with the teachings of the Church.