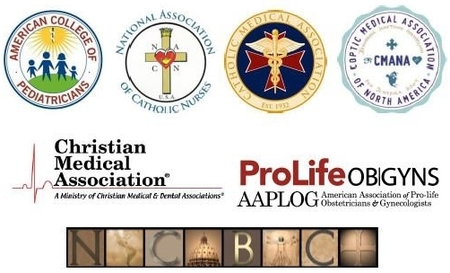 The coalition asserts in their statement to not use the "sanctity of the patient-physician relationship" as an excuse to passively ignore or actively reject the sanctity of human life, from conception to natural death. Furthermore, they encouraged their primary care colleagues to recognize the inherent right to life of all human persons, regardless of age, stage of development, physical or mental ability, physical location, state of dependency or the subjective designation of "being desired." The coalition is calling for better and more equitable healthcare for all vulnerable populations, including improved access to maternal and fetal healthcare, and improvement on social determinants of health.

Executive Director of American Association of Pro-Life Obstetricians and Gynecologists (AAPLOG) Donna Harrison, MD, said, "The Hippocratic Oath forbids both abortion and euthanasia. Neither the Group of Six nor any other group can force a physician to violate the Hippocratic Oath on which the doctor patient covenant is founded."

Executive Director of American College of Pediatricians (ACPeds) Michelle Cretella, MD, said "Americans need to realize that the Group of Six do not represent physicians who take an oath to first do no harm in the tradition of Hippocrates. The Hippocratic Oath logically forbids the intentional killing of human life from conception to natural death. Death is not a state of health; killing is not caring. Abortion, assisted suicide and euthanasia are not health care."

Chief Executive Officer of Christian Medical Association (CMA) David Stevens, MD, MA (Ethics), said, "Physicians are leaving these medical professional organizations because they no longer represent their worldview. The coalition's letter will only encourage efforts to force life-honoring professionals out of healthcare to the detriment of our healthcare system and, more importantly, our patients. Pro-life patients want a pro-life physician."

Senior Fellow of The National Catholic Bioethics Center Marie Hilliard said, "It is important to always recognize when considering the perinatal provider-patient relationship that there are two patients whose best interest we are charged in enhancing. Abortion violates that obligation."

President of National Association of Catholic Nurses, U.S.A. Diane Ruzicka, RN, MSN, said, "Physicians and nurses have a sacred responsibility to preserve and protect life. This was well known by the pagan Greek physician Hippocrates (430-370BC) credited with composing the Hippocratic Oath in which he stated, 'I will not give a lethal drug to anyone if I am asked, nor will I advise such a plan; and similarly I will not give a woman a pessary to cause an abortion.' Translated by Michael North, National Library of Medicine, 2002.

"The natural moral law informs us that civilized societies do not kill their young.

"As a society founded on the natural moral law and Christian principles, the Bible which is the Word of God consigned to writing, reveals how precious is man:

"Human life is precious and of immense dignity. Physicians and nurses have a sacred duty to protect life from conception to the time of death ordained by God," Ruzicka said.

The coalition's full statement can be viewed here.