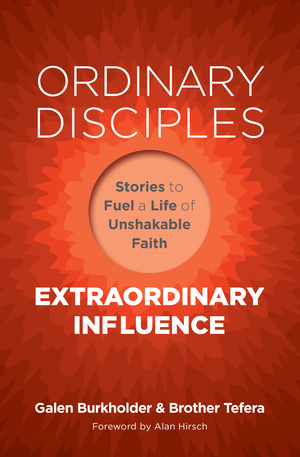 LANCASTER, Penn., April 14, 2022 /Standard Newswire/ -- The man on the phone identified himself as Ahmed. Just his name and the sound of his voice made Pastor Kofi anxious and unsettled. Ahmed was an imam and known for inciting violence and brutality against Christians. Kofi knew what was going on. This was a setup.

Except that it wasn't. Ahmed had experienced Christ in a powerful vision and was searching for someone to instruct him in the Christian faith. Pastor Kofi agreed to disciple Ahmed. One miracle led to another: everyone in Ahmed's mosque became a baptized followers of Jesus Christ; Ahmed's fellow imams also accepted Christ; and soon the mosques in the region became known as "Jesus mosques."

"Galen and Tefera share what God is doing through the work of Global Disciples in the southern hemisphere, work that is normally beyond our frame of reference," says Alan Hirsch, award-winning author and thought leader in missional leadership. "These are real stories from real disciples; people with names, faces, and narratives that have the potential to wake us from our somewhat anaesthetized forms of Western Christianity."

"Ordinary Disciples, Extraordinary Influence," the new book by Global Disciples founder Galen Burkholder and Brother Tefera, is an invitation to respond to Jesus' simple call. The call to step away from familiar ways, risk obedience, and follow Christ into a vibrant, faith-filled life as his disciples. Drawing on biblical insights and the miraculous stories of ordinary disciples, this book reveals the simple components undergirding Global Disciples' approach. Stories of radical obedience to Christ exemplify the essential components underlying a life of unshakable faith and extraordinary influence.

Although the book will officially be released on April 21, 2022 in Lancaster, Pennsylvania, books can be purchased now on Amazon and Barnes & Noble.

About the Authors
GALEN BURKHOLDER is the founder and CEO of Global Disciples, a near-culture missions organization which assists in the development of locally-sustainable trainings in discipleship-mission, small business, and leadership. Galen started in youth ministry while in college. He invested seventeen years in youth and young adult ministry, discipleship-mission training, and sending teams cross-culturally before launching Global Disciples in 1996.

BROTHER TEFERA grew up in Ethiopia, embracing atheism and chairing the Young Communists Party in high school before coming to faith in Christ at university. His math degree earned him a teaching position in an unreached area. While teaching high school math, he helped to plan twenty-seven new fellowships of believers in eleven years and was imprisoned for his faith three times.

Both Galen and Brother Tefera hold graduate degrees in evangelism and church planting. They have worked side by side as leaders in Global Disciples since 2007. They serve over 1,450 clusters of churches in 62 countries and have helped launch more than 2,000 training programs, mainly among people least-reached with the gospel.

About Global Disciples
Global Disciples assists in the development of locally-sustainable trainings in discipleship-mission, small business, and leadership, which result in reproducing fellowships of believers. We equip, connect, and facilitate cooperation in the global Body of Christ among clusters of churches in 62 nations focused on reaching those least-reached with the Gospel. We believe that local expressions of the Body of Christ in close proximity to least-reached people are best able to reach them to see every person have an opportunity to choose and follow Jesus Christ. For more information, go to globaldisciples.org.