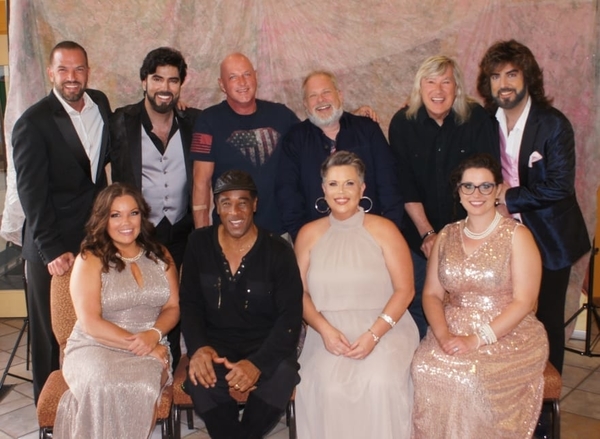 The Artists who Rocked the Night Away at the Legends Concert

NEWS PROVIDED BY
Chrisagis Brothers
May 20, 2022

YORKVILLE, Ohio, May 20, 2022 /Standard Newswire/ -- The Internationally beloved Chrisagis Brothers (Brian & Shawn) who came to fame through fun loving music videos from MTV and were named most eligible men in ministry have done a lot since those early days when people first laid eyes on them 13 years ago.

The Brothers have collected a few awards for their 12 successful CDs of original music.  They have performed all over the world, plus been all over Christian TV, in magazines and had a successful children's show, two TV pilots for two different networks and a line of children's toys. The Brothers are not new at making headlines, they have worked with Hollywood's greatest TV legends and been on stage with the worlds most dynamic Christian music stars.

Their latest headlining success, the Legends Concert that was this past weekend with four of the greatest male vocalists and songwriters in Christian music history; Leon Patillo, Scott Wesley Brown, John Schlitt from Petra and the one and only Gary Chapman, whose won tons of awards and been a success in both Christian and Country music.

The concert is simply called "Legends" and legends are what these concerts are made of and the concerts live up to name as they have been truly successful concerts for the past 10 years. They are the loving labor of the Chrisagis Brothers. They say they want to keep Christian music's heritage alive and truly they do.

The Brothers were dying as children, not able to go outside and the LPs of Christian music played in their home daily. They say that was their meat and life since they could not eat any solid foods. The music kept them alive and holding on for a miracle, which they received at the age of seven. Now they work hard to keep the Christian music artists and legacies alive.

This past weekend was to be the last Legends Concert and it was at Harbor Of Hope Church in St. Clairsville, Ohio. The church was filled to the max and for five anointed and amazing life-changing hours the concert went on. The Brothers hosted the event with TV legend and evangelist Terry Tripp from TBN and PTL. This was a night of great music, laughter, tears, inspiration and healing. Not one person in the audience wanted to leave.

The concert was the revival of the year with these great generals of the sacred music genre who gave it all with just one 40 minute intermission during the concert. The legendary artists sang from their classic hit songs and some new ones, plus Terry Tripp gave a great message and so did Gary Chapman who left the audience in tears with the most powerful message of forgiveness.

Leon Patillo and John Schlitt proved age is just a number as they rocked the night away. Scott Wesley Brown, the ambassador of the Legends Concerts closed both sections of the concert. The Brothers, with their beautiful singing team, (O'Linda Woods, Melanie Roskovich, Tricia Ware Amie and Mark Staler) gave tributes to the legendary artists like Sandi Patty, Amy Grant, Carman, Russ Taff, Michael English, Michael W. Smith, Steve Green, and Kathy Troccoli. The tributes blew everyone away because each person nailed their songs as if they were the legends themselves. Tributes were also done by Ed & Christy Moore to Petra & Kutless and a group of young girls from Spiro Academy (taught by Susan Cline) danced and sang to honor Christian music from past to present.

It was a great night and was supposed to be the last Legends Concert, but with all the love, tears, healing and deliverance that came in a revival of a night, the Brothers are sharing the good news that they will have another next year.  Additionally, they are in talks about making the Legends a tour and TV series. The Brothers say they will be sure to keep their fans posted.