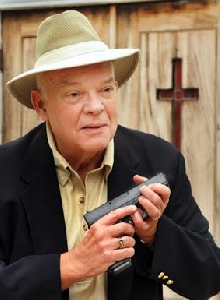 The Washington Post and New York Times have named Snyder the dean of gun lobbyists.

The Fortnight for Freedom of the United States Conference of Catholic Bishops (USCCB) underscores religious freedom in the USA. It commenced with the June 21 vigil of the feast of Saints John Fisher and Thomas More, English martyrs for religious freedom. It extends through the Fourth of July.

Snyder said, "Patriotic Americans commend the bishops for their promotion of religious liberty. At the same time, though, we abhor their refusal to recognize the individual right to self-defense and the means necessary thereto as part of their freedom agenda."

"The right to keep and bear arms is the linchpin of our system of civil rights," he continued. "It is the right that enables the American citizenry to maintain other rights, including freedom of religion."

"The standing USCCB resolution supporting the criminalization of handgun possession is a wretched mark of darkness on the American Catholic episcopacy," Snyder said. "American citizens and other innocent people throughout the world need handguns to protect their lives and the lives of their loved ones from Islamist terrorists and other criminals.

A practicing Catholic, Snyder has been named "a champion of the right of self-defense" by the Washington Times, the "gun dean" by Human Events, and "the senior rights activist in Washington" by Shotgun News. The Trace designated him a power broker.

He holds AB and MA degrees in government from Georgetown University. He has been an NRA magazine editor and official of the Citizens Committee for the Right to Keep and Bear Arms and Second Amendment Foundation. He directs Telum Associates, LL.C, and serves on boards of the National Association of Chiefs of Police, Council for America, and American Federation of Police and Concerned Citizens.