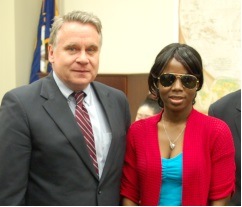 WASHINGTON, May 12, 2016 /Standard Newswire/ -- A Nigerian schoolgirl who twice escaped mass Boko Haram kidnappings told a congressional panel on Africa and human rights, chaired by U.S. Rep. Chris Smith (NJ-04), of her harrowing ordeal and of the growing violence in the northern part of the country.

Using the pseudonym "Sa'a" to protect herself and her family, the brave 20-year old explained how she escaped the clutches of Boko Haram and expressed the pain and sorrow she feels for those still in captivity every day.

"I have twice escaped from Boko Haram attacks on my schools, but many have not," said Sa'a. "Many live in fear every day. Their homes were burnt, so many people didn't have a place to sleep, food to eat or clothes to wear. They are now IDPs in other places." Click here to read Sa's' statement.

"We recently marked the tragic two-year anniversary of the kidnapping of nearly 300 schoolgirls from the town of Chibok in northeastern Nigeria," said Chairman Smith (NJ-04), who has travelled to Nigeria to meet with families of the kidnapping victims. "Sa'a, is one of the few who escaped this mass kidnapping, but many of her classmates were not so fortunate.  Many of these schoolgirls are believed to have been forced to convert to Islam and married to Boko Haram fighters or prostituted by this group.  We now receive reports that some of them may be used as suicide bombers.

"For more than a decade, the Nigerian government has battled the deadly threat of Boko Haram, now the world's most dangerous terrorist group," Smith said. "However, that fight has obscured other threats in the northern region of Nigeria, including a worsening conflict between Fulani herdsmen and a multi-ethnic group of farmers. In addition, there is a newer threat from Iranian-supported Shiites whose recent conflict with the Nigerian military led to hundreds of deaths earlier this year." Click here to read Chairman Smith's opening statement.

Nigeria is the most populated country in Africa, with more than 180 million people. Lagos, its commercial center, is one of the largest cities in the world. The nation is Africa’s largest economy and largest oil producer, and key U.S. partner in the region.

Boko Haram is considered the deadliest terrorist group in the world—responsible for 6,664 deaths last year alone. Since 2010, escalating clashes between Fulani herdsmen and a multi-ethnic group of farmers have left 3,000 people dead. An increasingly assertive group of Shia Muslims in northern states have come into conflict with the majority Sunni Muslims population in the areas such as Kaduna State, and last December, a clash between Shia and the Nigeria military left hundreds dead.

Smith has encouraged and tried to facilitate a more effective U.S.-Nigerian collaboration in the fight against Boko Haram, and U.S. counter-terrorism training has resumed after being suspended by the previous Nigerian government. Discussions are ongoing for further military assistance to Nigeria and its neighbors threatened by Boko Haram and other sources of extremist violence: Chad, Niger and Cameroon.

Congressman Wolf, a renowned human rights leader throughout his 34 years of service in the U.S. Congress (1981-2014), recently returned from a trip to Nigeria on a non-governmental human rights mission.  Wolf told the committee: "While we were in Nigeria, the Agatu village was attacked.  200-300 were killed over a sustained 2-3 day attack. And the attackers did not move on, but rather occupied homes within the village." Click here to read Wolf's statement.

Fomunyoh told the subcommittee, "Violence has contributed to negative economic growth…Nigeria could gain approximately $13.7 billion dollars a year in economic macroeconomic activity in the four most affected states were it not for the agrarian-pastoralist conflict." Click here to read Fomunyoh's statement.

Click here to watch a video of the May 11 hearing.

Smith visited Nigeria in 2013 and 2014, and heard from maimed victims of the terrorist group firsthand. He returned to Washington and introduced the "Boko Haram Terrorist Designation Act of 2013," H.Res. 3209. The State Department later agreed to declare the group a Foreign Terrorist Organization (FTO) at the November 13, 2013, House hearing chaired by Smith. Other hearings held by Smith on Nigeria were held July 10, 2012, July 10, 2014 and January 27, 2015.

For most updated version of this release, click on: