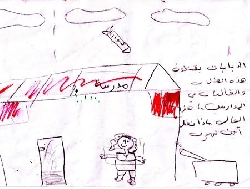 More than 2 million Iraqi refugees are scattered across the . and are hosting the majority of the region's refugees, with around 800,000 and 1.2 million, respectively. Hundreds of thousands more have fled to , , , and the . Another 2 million are displaced within .

Photo: This girl's drawing shows a school under assult by a tank and a bomb falling from a cloud-filled sky. The girl child in the picture is smiling broadly. The artist has written in Arabic, "Tanks kill students (two words in Arabic, girl students and boy students) in school. What is this? What do we do? Where to run? Hi-res. version available.

Up to a quarter of a million of the refugees in are of school age. Yet, according to the UN refugee agency (UNHCR) only around 10, 000 are going to school. A mere 4 percent of the refugee children are receiving an education in .

Despite the refugees' growing needs, little support from the international community has been forthcoming. As the burden grows, the major host governments of and are starting to close their borders to new refugees and are resisting calls to provide status to those seeking sanctuary within their borders.

Nevertheless, World Vision partner organisations in are finding ways to work with young Iraqi refugees. With World Vision's support, one organisation is now operating day programmes for 200 children, where they are able to play, to learn, and to rest in safety. Iraqi youth are also learning leadership skills and resilience through the centre.

Another local partner, a children's nursery is providing pre-school education for up to 150 children, as well as English classes and life skills to teenage girls. And through a third local organisation, 250 young Iraqis are being provided with recreational and educational activities, such as drama, arts, languages and literacy.

World Vision is working through four local partners in the areas of informal education, peace building, psycho-social support, food distributions and healthcare. World Vision also aims to build international awareness of the plight of Iraqi refugee children through the international media and lobbying of key governments

According to the United Nations High Commissioner for Refugees, this is not only the largest displacement crisis in the world, but it is also the fastest growing crisis. When combined with the Palestinian diaspora of 1948, the is now the largest refugee-hosting region of the world.

is neither a rich country, nor is it large. With a population under 6 million the role of hosting such a large population of refugees is overwhelming. Both local infrastructure and services are taxed to the limit. There are simply not enough places in Jordanian schools for new arrivals.

The Government of Jordan hopes for a solution to this refugee situation that does not require to continue to host them. Jordanian authorities are therefore reluctant to permit any activities that may encourage displaced Iraqis to remain in the country. Refugees are consequently denied legal status, are not allowed to work and earn an income, and formal education is not permitted for the young. Even registration with the UNHCR does not provide legal protection and forced deportation remains a risk.

It has been one month since the world pledged support for 's displaced millions at the UNHCR-hosted conference in . Yet the international community continued to do little more than watch as yet another 50, 000 Iraqis fled their country during the month, and the situation facing the 4 million already displaced worsened.

World Vision has declared the Iraqi displacement crisis to be a Category III emergency – the highest level of emergency within the international aid agency's partnership. Relief and advocacy teams are conducting the response jointly.