Where is the Outrage from American Feminists, Women's Groups and Female Athletes Regarding the Brutal Treatment of Uyghur Women?

In response to these horrific atrocities, Stanton Public Policy Center launched the global campaign, #LeastWatchedOlympics. It sends a clear message to the Chinese government the world stands in solidarity with Uyghur women and all those who are being brutalized in China, as we refuse to participate in the 2022 Beijing Olympic Games.

Stanton Public Policy Center/Purple Sash Revolution is a women's advocacy and educational group that works on issues of human rights and justice which empower and inspire women. It is affiliated with Stanton Healthcare which has life-affirming women's health clinics in America and internationally.

"For years, I have been a global voice and public witness for human rights, justice and equality for Uyghur women. With great disappointment, I ask this question. 'Where are all the voices of American women's rights groups speaking out for Uyghur women during the 2022 Beijing Olympics?'

"There is a virtual silence right now, which is a tragic betrayal of women's rights and freedoms worldwide. It is especially disheartening to see America's female Olympians and athletes refusing to speak.

"The Chinese Communist Party is especially brutal toward Uyghur women, who are experiencing forced pregnancy checks, medication that prevents menstruation, forced abortions, surgical sterilizations, rape and genocide. It is a clear reminder abortion and eugenics are a global injustice against Uyghur women and we can never be silent on these issues." 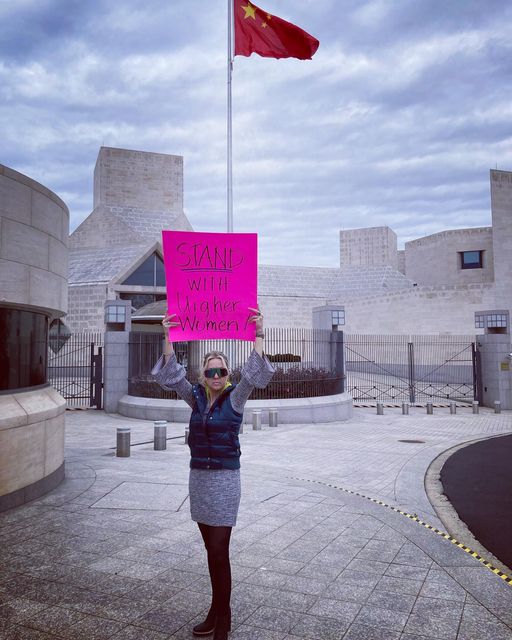 Brandi Swindell standing in solidarity with Uyghur women outside
the Chinese Embassy in Washington, DC.

"Where is the outrage in America? As Uyghur women are sterilized and forced to undergo abortions against their will, as the Uyghur birthrate dramatically plummets, as an entire minority population is targeted for unspeakable crimes, who is speaking up for basic human rights?

"The women of America should be bold in their condemnation of the Chinese Communist Party's shameless atrocities against Uyghur women, but all we hear is crickets from the major women's advocacy organizations. The rights we enjoy in the United States came at a high price for our mothers and grandmothers, and we have a responsibility to use our liberated voices to defend our persecuted sisters around the globe." 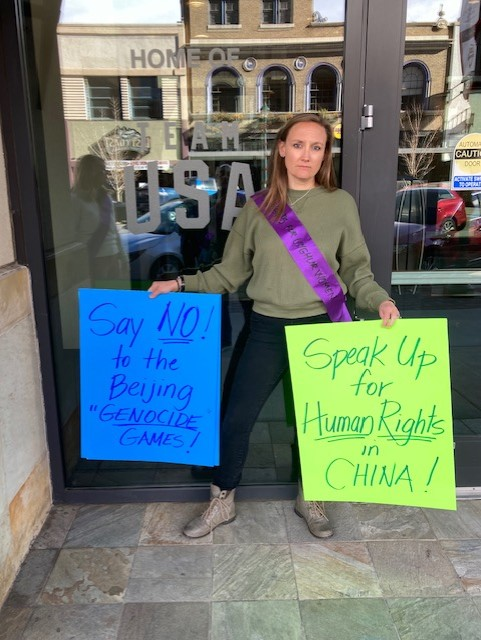 Danielle Versluys protesting outside of US Olympic Headquarters