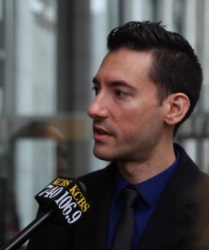 KANSAS CITY, Mo., April 4, 2017 /Standard Newswire/ -- Crowdfunding company, WonderWe, announced it is hosting an online funding campaign for David Daleiden, a Pro-life advocate recently charged in California with a total of 15 felony counts, 14 counts of unlawfully recording people without their consent, and one count of conspiracy to invade privacy.

Prior to the recording incidents, Daleiden and colleagues at the Center for Medical Progress (CMP) constructed a fake company and infiltrated Planned Parenthood using fake identities. The citizen journalist recorded many hours of undercover footage, numerous eyewitness testimonies, as well as ample primary source documents.

In January, 2016, a grand jury in Harris County, Texas, indicted Daleiden on a felony and misdemeanor charges. All charges were dropped at the request of the Harris County District Attorney later that year.

"David Daleiden's investigative journalism provided an indispensable public service by shedding light on Planned Parenthood's criminal activities and its callous disregard for human life.  As a direct result of Daleiden's efforts, federal and state prosecutors are investigating the nation's largest abortion giant and its taxpayer funding is threatened.  Now Planned Parenthood is calling in favors from its political cronies in retaliation," Snyder stated.

Life Legal Defense Foundation is defending Daleiden in two lawsuits filed against him by the National Abortion Federation and Planned Parenthood.  The nonprofit firm created a crowdfunding campaign at: www.wonderwe.com/daviddaleiden.

"WonderWe is standing behind David Daleiden completely and invites everyone to support this Pro-life soldier!" WonderWe founder, Dominic Ismert stated. "All contributions to Life Legal Defense Foundation's campaign are tax-deductible upon donation."

About WonderWe:
WonderWe is a free crowdfunding site focused on helping individuals, nonprofit organizations, churches and schools go beyond "me" to find the power of "we" with the launching of key innovative features. With a focus on faith, life and family, WonderWe takes the "me" out of fundraising and turns it into a "we." The WonderWe crowdfunding platform offers advanced features like group fundraising, peer-to-peer fundraising and viral video sharing. A WonderWe fund is the future of fundraising!