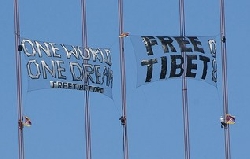 , April 7 /Standard Newswire/ -- Seven Tibet independence activists were detained this afternoon after three of them scaled the and unfurled a large protest banner reading "One World, One Dream, Free Tibet 08."  The three climbers remained on the bridge for about 2 hours before coming down voluntarily. Upon their descent they were met and arrested by officers of the California Highway Patrol.  The daring action comes two days before 's torch relay is expected to be greeted by thousands of protesters from across North America when it arrives in . Already, the torch's so-called 'Journey of Harmony,' which China's leadership hoped would improve its global image and divert attention from its ongoing occupation of Tibet, has been overshadowed by boisterous protests in Olympia, Istanbul, London and Paris.  In all these cities, campaigners have engaged in dramatic actions to highlight 's ongoing brutal crackdown on freedom protests inside .

"In two days, the Chinese government is bringing the Olympic torch to San Francisco, while inside Tibet it continues its brutal and violent crackdown on Tibetans crying out for freedom," said Tashi Sharzur, spokesperson for Students for a Free Tibet and one of the activists detained in today's action. "The International Olympic Committee must immediately withdraw from the Torch Relay route.  Carrying the Olympic torch through would exacerbate the crisis and cause yet more suffering for the Tibetan people."

" has a long, proud history of standing up for human rights and freedom, and we will not allow 's government to make a mockery of everything this city stands for," said Laurel Sutherlin, one of the climbers and a spokesperson for Students for a Free Tibet.  "Gavin Newsom has privately agreed to express his concern with the IOC over 's torch going through . Mayor Newsom must now publicly follow up on this promise and call for to be removed from the torch route."

China's latest deadly attack on Tibetans came in in Tongkor Township (Kardze County), in southeastern Tibet on April 3rd after Chinese authorities detained two monks for possessing photos of the Dalai Lama.  Following a raid by over 3,000 armed police at Tongkor monastery, the police opened fire on the crowd of over 700 people - nearly half of whom were monks - gathered to protest the arrests. All Tibetan areas remain closed off to independent media, but eyewitness reports from all across describe severe beatings, suicide attempts by monks locked inside their monasteries, house-to-house searches and, in one instance, a large group of Tibetans being boarded onto a train to an unknown destination at 's new railway station.

Photos and video footage will be available at: http://drop.io/sfapril7