The Timing of the Mark of the Beast 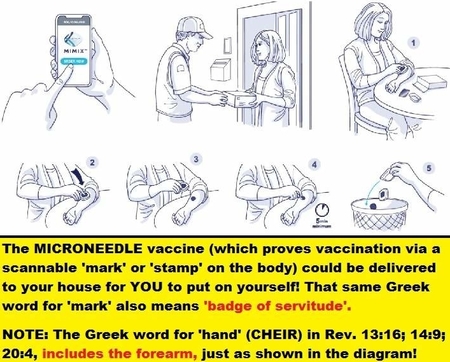 The mark of the beast is the coming soon - a literal mark, stamp or scratch ('badge of servitude'; 'recognition of ownership') on the right hand or forehead; this mark will be needed to literally 'buy or sell' (Rev. 13:16-17). Deceitful movies, as well as various false religious doctrines, have misled many into various, errant beliefs ranging from the worship of God on Sunday being the mark, to it being the RFID chip. Many are wrongly expecting some grandiose inauguration ceremony to occur and are waiting for the "beast" (antichrist) to be openly 'revealed' to the world before his mark is issued, but there is no scripture to support any of that!

At the behest of Bill Gates, MIT developed the invisible Quantum Dot Tattoo mark, which glows under a special light due to LUCIFERase; this tattoo is simultaneously implanted just below the skin's surface via the microneedle 'smart patch' or 'nanopatch' vaccine. That bodily 'stamp' fits the infamous, biblical description, making the 'mark of the beast' Bill Gates' mark. But the big question is still, "WHEN will it come about?"

When this PLANdemic was pushed onto the public in March 2020, Bill Gates addressed the world and stated it would take 18 months (which is 6 times 3 or three 6s) for an 'approved vaccine' to be available. That date would bring us to around September 2021. Gates is involved with Lucis Trust, which was previously named the Lucifer Publishing Company. Furthermore, just before Halloween 2021, Bill Gates, who lives in a house that is 66,000 square feet, will turn 66 years old. Bill Gates III, who is the largest farm owner in the USA
(https://banned.video/watch?id=6069f1c64b2ccb7d1cb741dd), has the numeric value of 666 attached to his name, in all caps in ASCII (See Rev. 13:18).

The MIMIX vaccine, (which is a microneedle vaccine) by way of its own diagram, shows Phase 1 to start around that same time. Moreover, according to an article published by the British Broadcasting Corporation 'a tiny tattoo on the arm, invisible-to-the naked-eye, but readable by an infrared scanner' as one's vaccination record, could be here by 2022 (http://www.bbc.com/travel/story/20200621-will-travel-be-safer-by-2022). Connecting the dots, and based on the foregoing data, one cannot exclude the possibility that the mark of the beast might be coming soon, but its arrival will surely NOT be as depicted in the movies!

Because DECEIT is prospering now (Dan. 8:25) and because the mark of the beast will surely be coming with great deception, one possibility is: people will NOT even know that the coming Covid booster scheduled for Fall 2021 will leave behind a mark on their body, that is, IF the microneedle vaccine is indeed utilized at that time. It is also highly possible that when the mark is issued - one's personal finances will NOT be connected to that bodily mark until AFTER people have received it as their booster vaccine.

With both the food sources and the dollar under heavy attack, current events and forecasts show the 3rd seal (famine and hyperinflation) is quickly approaching. That likewise means that seal #4 (Rev. 6:7,8) is also imminent; seal #4, in part, is when the faithful saints get beheaded for remaining faithful to Jesus (Rev. 6:9-11 cf. 20:4) and for refusing the mark before their departure to PARADISE (Rev. 7:9-17). Once again, this train of events indicates just how little time is left from June 2021.

Indeed, our days are very distressing, yet also very exciting, as Scripture is being fulfilled before our eyes. Reality is: we have already entered the Great Tribulation (the distress of those days of Mt. 24:29) and the rapture will NOT deliver anyone from the coming mark of the beast and the approaching 'war on the saints' (Rev. 13:7). Hence, IF there were ever a time to draw near to God and to live holy, NOW is the time. IF you are not set free from your sin addictions now, you are not a Christian (Rom. 6:18; 6:20; 6:22 cf. Eph. 5:5-7; etc.), though you may have been one in the past (2 Pet. 2:20-22; 1 Tim. 1:5,6; etc.). The remedy is to sincerely and humbly REPENT and to commit to faithfully follow Jesus.

There is NO ETERNAL SECURITY. IF you buckle under the relentless pressure and take the mark of the beast, that single act of disobedience will send you to the lake of fire (Rev. 14:9-12), further proving that the saints will still be here and that there is no Once Saved Always Saved. BTW, many, who said a year ago that they would not take the 'vaccine,' ended up getting their hydrogel, gene-altering, experimental, unapproved, toxic injection just to travel (or keep their job). What will such people do when confronted with losing their property and no more buying of food?

The world is about to drastically change even more than it has already -- and for the worse. Think and live BIG PICTURE, with Judgment Day, eternity and PARADISE in mind (2 Cor. 4:18; Col. 3:1,2; Rev. 7:14-17). The key to victory is stated as, "They overcame him by the blood of the Lamb and by the word of their testimony; they did not love their lives so much as to shrink from death" (Rev. 12:11).

[Come to the weekly Internet Church for more ongoing and relevant truth.]