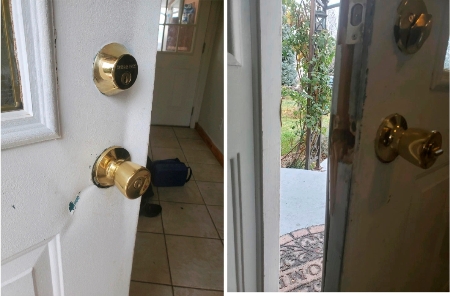 Bishop heard a loud banging sound at her door early Tuesday, not thinking federal agents were trying to enter her home, she said on an interview with WWW Broadcast Network.

She also claimed during the interview an agent "manhandled" her daughter, leading the teen through their Grand Junction, Colorado, home by her hooded sweatshirt.

FBI agents searched three other western Colorado homes, including that of Peters, according to a coloradopolitics.com article written by Ernest Luning.

"The FBI raided my home at 6 a.m. this morning, accusing me of committing a crime," said Peters, 66, a Gold Star mother and elected official as reported in coloradopolitics.com. "And they raided the homes of my friends, mostly older women. I was terrified."

Earlier this year, Peters and Bishop appeared on the Truth & Liberty livecast to detail their work in defending election integrity, according to a Truth & Liberty spokesperson. Peters is under fire for preserving election records prior to a scheduled 'upgrade' of Dominion voting machine software ordered by the Colorado Secretary of State office, she said on the livecast.

According to a Mesa County Forensic Examination and Analysis report, the Griswold-Dominion upgrade deleted approximately 29,000 files, including hundreds containing election records critical for a full audit. Peters contends the removal of files violates state and federal law and would have made a full investigation into the results of the contested 2020 presidential election impossible, she said on the livecast.

"They are looking for anything and everything to try to discredit us -- to discredit me as a whistleblower -- because of what we found on these Dominion machines," Peters said Wednesday in an interview with former Trump advisor Steve Bannon.

Tuesday's raids shined light on the perceived politicization of the FBI, according to the T&L Coalition. "Recent decisions by the FBI to investigate concerned parents at school board meetings at the request of the National School Board Association along with raids of whistleblowing journalists from Project Veritas have raised questions about the impartiality of federal law enforcement," according to Truth & Liberty Coalition.

Inspector General Michael E. Horowitz said such incidents have "negatively impacted the perception of the department as a fair administrator of justice," according to The Epoch Times news report by Zachary Steiber, November 17, 2021.

Bishop's work during 2021 school board elections raises questions about whether her involvement triggered increased scrutiny from the FBI. "Colorado was able to flip nine school boards this year. We were able to get one of our leftists to resign and we also flipped our school board in the election," Bishop said during a broadcast at Lindell TV Wednesday night. "And people like me are considered domestic terrorists now, because we don't stand for the policies that have been forced upon our children."

"We encourage citizens to contact officials to preserve election records in their communities, tell county clerks to make images of election machine servers, call on state legislators to support election integrity laws, and demand Congress hold federal agencies like the FBI and Department of justice accountable." according to a Truth & Liberty Coalition official.

About Truth and Liberty Coalition: Truth & Liberty Coalition, Inc. is a 501(C)(4) non-profit based in Woodland Park, Colorado. Established by Andrew Wommack and other Christian leaders, the goal is to educate, unify and mobilize Christians and conservatives to become involved in the affairs of their community and government.