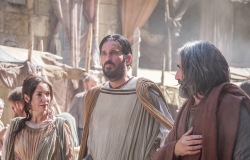 Paul, who goes from the most infamous persecutor of Christians to Christ's most influential apostle, spends his last days awaiting execution by Emperor Nero in Rome.  Paul is under the watchful eye of Mauritius, Mamertine Prison's ambitious prefect, who seeks to understand how this broken old man can pose such a threat. As Paul's days grow shorter, he feverishly works from prison to further the Gospel of Jesus Christ, and embolden his followers to stand strong in their faith against Roman persecution far greater than has ever been seen.

"Next to Jesus, no one played a more central role in the growth of early church than the Apostle Paul," said AFFIRM Films Executive Vice President Rich Peluso. "He wrote  a vast swath of the New Testament and traveled more than 10,000 miles by foot to preach the Gospel of Jesus Christ. This gripping film dives deep into the final months before Paul's execution under Nero as he reconciles his faith with his past persecution of the church."

"Paul changed from murdering Christians to becoming their unlikely leader. His life personifies 'forgiveness,' a concept that seems almost impossible today- but desperately needed." Says Producer T.J. Berden.  "We at ODB Films are overjoyed to be working alongside Sony AFFIRM to share this much needed story with the world."

David Zelon, who has produced two films for AFFIRM Films, brings his years of experience working at Mandalay Pictures to this project. He worked with Jim Caviezel on AFFIRM Films' "When The Game Stands Tall," and is excited to bring Caviezel into his first biblical role since "Passion of the Christ."

The film is slated to release in 2018 through Sony's AFFIRM Films.

Register to get all the latest news from AFFIRM Films at secure.sonypictures.com/registration/?property=affirmfilms

About ODB
ODB Films is a Catholic ministry dedicated to fostering an encounter with Christ through artfully made, spiritually rich films. Founded in 2005 with the goal of providing a Christian presence in the social reality and a digital platform to meet teenagers where they are while striving to provide a Christian response in today's social media.  In its first decade, ODB produced and distributed more than 200 short films reaching thousands of young people in Catholic churches, dioceses, and other Christian faith communities throughout the world.  In 2016, ODB produced its first feature film, the award-winning FULL OF GRACE, that is distributed domestically by Cinedigm Corporation and world-wide by Mission Pictures International. www.odbfilms.com

About AFFIRM Films
AFFIRM Films produces, acquires and markets films that inspire, uplift and entertain audiences around the world. Since releasing its first theatrical film - The Kendrick Brothers drama, FACING THE GIANTS in 2007, AFFIRM Films has released numerous quality faith-based films including SOUL SURFER; based on the inspirational true story about surfer Bethany Hamilton - WHEN THE GAME STANDS TALL; the sports drama inspired by the story about the De La Salle Spartans - WAR ROOM, which hit #1 on the domestic box office chart; RISEN, which followed the epic Biblical story of the Resurrection, as told through the eyes of a non- believer - and was the faith-based marketing partner with Columbia Pictures and TriStar Pictures for their films, MIRACLES FROM HEAVEN and the #2 faith-based film of all time, HEAVEN IS FOR REAL. Most recently released is ALL SAINTS, based on the inspiring true story of salesman-turned-pastor, Michael Spurlock (John Corbett). In partnership with Sony Pictures Animation and Columbia Pictures comes the animated film THE STAR on November 10, 2017, the story of the first Christmas from the perspective of the animals in the manger. AFFIRM Films is a division of Sony Pictures Worldwide Acquisitions (SPWA), a Sony Pictures Entertainment (SPE) company. www.AFFIRMFilms.com

For additional information, go to www.sonypictures.com.