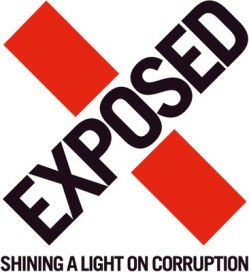 Contact: +41 79 507 6363; www.oikoumene.org/press
GENEVA, Switzerland, Aug. 20, 2013 /Standard Newswire/ -- The World Council of Churches (WCC) invites its member churches to join a global call to action against corruption – which impacts poor people the most. Studies have shown that every year over 1 trillion US dollars go missing from the global economy through bribes, dishonest deals and tax evasion.
With its central emphasis from 14 to 20 October, the global call to action EXPOSED 2013 will engage people around the world in raising their voices against corruption. The initiative is organized by a coalition of Christian organizations known as the Micah Challenge International.
The campaign offers suggestions for positive and practical engagements of resisting corruption. It aims to hold 2000 vigils with the poor across the globe, while collecting 1 million signatures for the campaign and presenting a million more at the G20 meeting set to take place in November 2014.
"The WCCs' concern and response to the issue of corruption is founded on God's preferential option for people in poverty," said Rev. Dr Olav Fykse Tveit, the WCC general secretary.
"Corruption is rooted in and propagated by our prevailing economic structures, cultures and value systems" which are driven by "greed, relentless pursuit of power, profit and material gain by corporations, political bodies, administrators and individual actors," he said.
"Confronting systemic corruption is therefore a matter of upholding God's justice," Tveit added.
The WCC general secretary called EXPOSED an "important effort" which he said correlates to the WCC's engagement with the churches in their struggles against economic injustice.
The WCC's programme on poverty, wealth and ecology deals with issues related to just trade, ecological debt, overcoming greed, decent work and efforts of seeking alternatives to globalization.
Objectives of the EXPOSED campaign resonate with the theme of the WCC's upcoming assembly "God of life, lead us to justice and peace". The WCC assembly from 30 October to 8 November in Busan, Republic of Korea will also host a plenary on "overcoming greed".
The WCC together with World Communion of Reformed Churches, Council for World Mission and the Lutheran World Federation will hold an international panel on "New Financial and Economic Architecture" from 23 to 25 August in Switzerland. The meeting will develop advocacy strategies on how to "overcome greed" while working towards a new economic and financial architecture.
"Micah Challenge International" takes its name from Micah 6:8, "…and what does the Lord require of you but to do justice, and to love kindness, and to walk humbly with your God?"