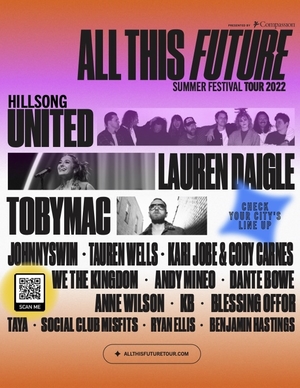 NASHVILLE, May 10, 2022 /Standard Newswire/ -- Premier Productions announces the All This Future Summer Festival Tour with 17 artists slated to perform on various dates throughout the tour this July and August. A robust group of artists team up with Hillsong UNITED in different cities across the country, playing a mix of amphitheaters and arenas. Select dates will also feature TobyMac, Lauren Daigle and Johnnyswim.

"The All This Future Summer Festival Tour is going to bring a powerful, one-of-a-kind night to each city that it visits," says Dan Rauter, SVP of Global Touring with Premier Productions. "Each tour stop will showcase a truly diverse group of artists of faith, covering a wide range of musical styles, and whose music is impacting lives inside and outside of the church walls."

Audiences can sign up for the exclusive pre-sale now at AllThisFutureTour.com. Tickets go on sale to the public on Friday, May 13 at 10:00 a.m. local time.

"Our prayer for this tour is that people will be encouraged and filled with hope," says JD of Hillsong UNITED. "The world feels as hurt and battered as ever but we know God's presence is with us, and in His presence there is peace, joy and love. Despite the season we all may be in, there is a reason to gather together and sing!"

This once-in-a-lifetime tour is something fans certainly won't want to miss as the mega-star line-up of artists will lead audiences in a time of praise, a time of song and a time of pure fun.

The 14-city summer tour kicks off in Scranton, Pa. on July 25 and will travel all over the country before its culminating final stop in Austin, Texas on August 11. For a full list of dates and cities, see below.

About Premier Productions:
Founded in 1996, Premier Productions has sold over 20 million tickets to patrons. Premier has been a Top 20 global promoter and has produced more than 2,000 concerts and events in the past five years. Pollstar named Premier the #1 faith and family independent promoter in the last 10 years. Producing events that move the soul both nationally and internationally, Premier is proud to have helped raise more than $271 million to improve the lives of children and communities in 100+ countries worldwide. Whether it's a large multi-day festival, sold-out concert or intimate conference, Premier seeks to positively impact the lives of every attendee so they leave encouraged, happy and hopeful. Premier is currently promoting acts including Hillsong UNITED, Dude Perfect, Lauren Daigle, Hillsong Worship, Baby Shark, Casting Crowns, Chris Tomlin, Sadie Robertson, Elevation Worship, Kari Jobe Bethel Music and many more.

About UNITED:
UNITED is a multi-award-winning, platinum-selling artist whose chart successes (repeatedly no. 1 on Billboard's Christian charts and up to #5 on Billboard 200) are only bested by the millions of lives they've impacted across the globe. The modest band born from a youth ministry out of Hillsong Church in Australia touts a reach of over 15.8 million across all major social network platforms to date, including 6 billion minutes garnered from YouTube viewers. Comprised of an evolving, eclectic mix of musicians and songwriters, the band is led by Joel Houston and Taya, names that have become synonymous with Christian radio, dominating airwaves with every new release. Their last four studio albums have each topped the USA Christian chart, with "Zion" and "Empires" charting no. 1 ("Zion" recently also went Gold in the US); "Oceans," written by Houston and band member Matt Crocker recently went triple platinum in the States, counting 200+ million streams and reigning on top of the Christian songs chart for a record 54 weeks.

In studio, on tour or at home, UNITED is committed to writing songs that speak truth, create a unique sound and connect people everywhere with God, evident by the success they've seen globally. With over 50 countries and six continents visited, UNITED continues to sell out arenas and stadiums around the world, including sold-out nights at the Forum, STAPLES Center and The Hollywood Bowl in Los Angeles, The Toyota Center, Oracle Arena, Air Canada Arena, American Airlines Arena (Miami and Dallas), and Red Rocks to scratch the surface. UNITED functions from the deep understanding that everything they do is an expression of a really extraordinary God doing what only He can do, through really ordinary people.