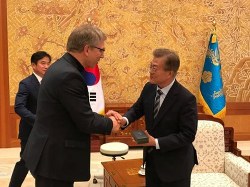 Mr Moon is a former human rights lawyer, who once served as a member of the National Council of Churches in Korea (NCCK) Busan Chapter for human rights.

"That President Moon received us so early in his term is a sign of his recognition of the role that churches in Korea and the WCC have in building relations for peace on the Korean peninsula," noted Tveit.

President Moon expressed his appreciation for the work of the WCC and the ecumenical movement in promoting democratization, human rights, peace and reconciliation in Korea for more than 45 years. The President affirmed that such religious and civilian exchanges are important in helping to reduce tensions and to promote normalization of relations. He stressed that his administration is committed to engaging in dialogue with North Korea, but that recent repeated missile tests by the North obstruct this intent. He called for North Korea to help create the conditions for inter-Korean dialogue by suspending such tests.

President Moon underlined that establishing a "peace regime" on and the de-nuclearization of the Korean peninsula are key priorities for his administration. He expressed the hope that the WCC and the NCCK would continue to work for these purposes, too.

An international conference convened by the WCC in Hong Kong in November 2016, with participants from North and South Korea and from 11 other countries, called for future ecumenical initiatives to be purposefully and explicitly configured to model and exercise leadership toward a peace treaty for the Korean peninsula, to replace the Armistice Agreement by which the Korean War was suspended in 1953.

"Everywhere I go around the world, especially in these times of heightened geopolitical tensions," remarked the general secretary, "I am asked about the situation in the Korean peninsula and about how the WCC and the churches in Korea can do more to help reduce tensions and to promote peace and reconciliation in this region. We have a long history of supporting encounter and dialogue between Christians from both North and South Korea, and we are committed to doing more."

"We and our member churches place much hope in your leadership for a fresh start for peace among the divided Korean people, and we pray for you as you serve in this high position in this significant time for your nation and for the world," Tveit told the new president.

The World Council of Churches promotes Christian unity in faith, witness and service for a just and peaceful world. An ecumenical fellowship of churches founded in 1948, today the WCC brings together 348 Protestant, Orthodox, Anglican and other churches representing more than 550 million Christians in over 120 countries, and works cooperatively with the Roman Catholic Church. The WCC general secretary is the Rev. Dr Olav Fykse Tveit, from the [Lutheran] Church of Norway.