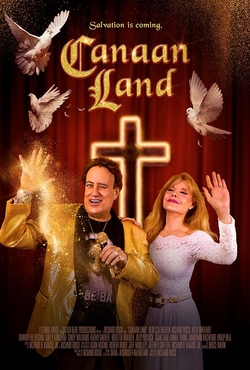 HOLLYWOOD, Calif., Dec. 2, 2020 /Standard Newswire/ -- Richard Rossi was a maverick minister in Pittsburgh when he discovered televangelists faking miracles for money. He vented his anger with writing. Rossi journeyed from scripture to script, writing "Canaan Land" a novel about a con-man preacher who falls in love with a sincere Christian and repents of fleecing the flock.

After decades of staging the story as a play, and a dream of making it into a movie, "Canaan Land," directed by Rossi, is an entry in the 2021 Oscars. The drama stars Knight Rider actress-singer Rebecca Holden as Sister Sara and Rossi playing guitar-playing preacher Brother Billy.

The Academy Awards is Hollywood's most prestigious award. Since 1927, nominees are selected by members of the Academy of Motion Pictures.

"Canaan Land," though made with volunteers on a shoestring, is on the lips of insiders predicting its David challenging Goliath, giving big-budget films a run for Oscar gold.

Theater closures and release delays made the state of this year's Oscar race unusual, but the race is on to make the 2020–21 awards season exciting. One of the changes is a rule that allows streaming movies that had planned theatrical releases eligible.

Rossi released "Canaan Land" as a novel that rocked the religious world, exposing fraudulent preachers, and is the basis for the film.

Canaan Land is a modern telling of an "Elmer Gantryesque" story. The plot revolves around Sara's redeeming Billy, who turned her online ministry into a Tinseltown racket.

The story contrasts Billy's focus on offerings with Sara's genuine faith. The intention is to show the authentic by exposing the counterfeit. Rossi said, "Some are upset about my movie for exposing the fake preachers, but the truth shall set us free."

The novel Canaan Land is available in paperback, Kindle, and audiobook. Proceeds are used to finish the film.

Christianity Today reported that the film's office received messages of support as well as opposition from groups wanting to stop the film owing to its subject matter.

"Sister Sara is motivated to serve God and people," Rebecca Holden said. "Billy is more self-motivated. We must keep our eyes on God and have discernment in choosing spiritual leaders."

"Canaan Land" is set for a release by year-end in time to qualify for awards.