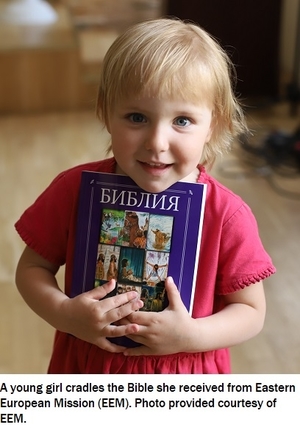 HURST, Texas, Feb. 9, 2022 /Standard Newswire/ -- Eastern European Mission (EEM), a group that has steadfastly worked to supply Bibles to Eastern European countries for the last 60 years, broke its 2020 record with the distribution of 1,529,668 Bibles and Bible-based materials into 32 nations and 23 languages – free of charge – in 2021. Even in the difficult era of COVID, EEM's total 2021 number is a 15% increase from the previous year.

"It's easy for us to be overwhelmed by the numbers; however, they have purpose and are inspiring," said Robert Burckle, President of EEM. "Behind these incredible statistics are real people whose lives are forever being changed by the 'Good News' that is taking hold of their hearts and transforming their lives."

EEM's mission is to sow the seed of God's Word in the native languages of the nations of Eastern Europe and beyond by distributing Bibles and Bible-based materials to individuals, churches, public schools, orphanages, youth camps, hospitals, prisons and rehabilitation institutions.

EEM works with national leaders in Ukraine, Romania, Croatia and other countries to place Bibles in public schools. Currently, more than two-thirds of the schools in Ukraine have received Bibles from EEM, and many educators are actively using them during the academic year. They are seeing the positive impact of the Bible's moral and ethical teachings on the students' behavior.

"We would love to see this replicated in many other nations from whom we are receiving numerous requests, which can only be accomplished through increased financial support," stated Burckle. "But God has been faithful and we know he will continue to be. His Word is transformative and we continue to pray that our efforts in Eastern Europe will have a great impact on the Kingdom for generations to come."

About Eastern European Mission
Eastern European Mission (EEM) was established in 1961 to provide Bibles and Bible-based materials throughout the former communist bloc countries in Eastern Europe. Today, EEM publishes and prints Bibles and New Testaments as well as Teen Bibles, Children's Bibles and coloring books, distributing them through a vast network of partner churches and organizations reaching more than 32 countries in 23 different languages, including Farsi and Arabic. Bibles in these languages have recently been given to Middle Eastern refugees who landed in Greece, which has resulted in thousands of them coming to Christ. For more information, see www.eem.org.