EchoLight Studios to Release the Next Holiday Classic, 'The Christmas Candle,' in Theaters this November 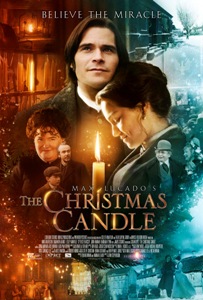 The timeless holiday movie for the entire family represents the first wide theatrical release for former U.S. senator and presidential candidate Rick Santorum as new CEO of EchoLight Studios. In addition, it is the inaugural film based on a book by America's most inspiring author Max Lucado, and introduces the acting debut of British singing sensation Susan Boyle, alongside an ensemble cast of beloved Hollywood talent.

"Surprisingly, a Christmas movie releasing for the holidays is a unique event, as there have been very few in recent years," said Santorum. "This film hearkens back to the heartwarming and uplifting movies of yesteryear. The story inspires renewed hope in the miracle of Christmas and illustrates that this holiday is not just about reindeer and receiving gifts. The Christmas Candle will remind audiences of the spirit and sense of wonder of the season -- something that is often lost in our modern era."

Santorum will oversee EchoLight's domestic distribution of the holiday movie, and will personally tour cities throughout America to create awareness through exclusive preview screenings in the coming weeks.

"Our goal is to release quality entertainment with positive, uplifting messages of hope," Santorum continued. "That's what people across America and the world are looking for, including my own family. We're always searching for movies we can take the whole family to, and we think there are millions of others who share that desire."

The Christmas Candle marks the feature-film debut for Scottish singer Boyle, who was introduced to the world on Britain's Got Talent in April 2009. In addition to her acting, Boyle graces the project with her original single, Miracle Hymn, the anthem for the movie and track on her new album, Home for Christmas, releasing October 29. She said the story inspires her because, "You never give up on your dreams and you never stop believing in miracles."

The Christmas Candle is based on the book by international bestselling author, Max Lucado, who also makes a cameo in the film, and is set deep in the heart of the English countryside in the enchanting village of Gladbury. Legend has it every 25 years an angel visits the village candle maker and touches a single candle. Whoever lights the Christmas Candle receives a miracle on Christmas Eve. But in 1890, at the dawn of the electric age, this centuries-old legend may come to an end.

"This tale about a 19th century village of simple people in the English Cotswolds in need of a miracle has lifted spirits for seven Christmases and now thanks to producer Tom Newman and EchoLight Studios, the Candle story will touch a whole new generation," Lucado said. "I couldn't be more pleased. What an honor to be a part of capturing a slice of this golden era of British history...the light of the candle still flickers."

Indeed fans of Downton Abbey and other British entertainment will enjoy the innate "Englishness" of everything about The Christmas Candle, from the ideals of clinging to cherished traditions and persevering through difficulties, to the wonderful accents and turns of phrase. It's a visit back in time to a simpler life, with an appreciation for the challenges of the era and complexities of the characters.

"We placed great emphasis on the quality of the production, filming at a village in the Cotswolds for authenticity and emphasizing period costumes and props for realism," Newman said. "Many of the cast, while seasoned veterans of the stage and film, found themselves touched by this lovely story and beautiful script full of hope and the spirit of Christmas. They also appreciated the wonderful nostalgia factor of The Christmas Candle, commenting it had the flavor of It's a Wonderful Life or Miracle on 34th Street."

Shot in early 2013, the film, which runs 100 minutes in length, is produced by Tom Newman of Impact Productions, and Hannah Leader of Big Book Media. Executive Producers on the project include Brian Lockhart, Steve Christian and Huw Penallt Jones and screenplay by Eric Newman and Candace Lee.

Note to Editors: For more information, including clips and links to the movie, please contact Alice Stewart or go to www.EchoLight.com.