Would Religion Have Saved Bourdain? 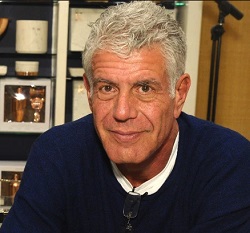 If Anthony Bourdain had been a religious man, would he have killed himself? Probably not. The celebrity chef was found dead today in his hotel room in Strasbourg, France.

Bourdain was raised by his Catholic father and Jewish mother, though neither of them saw fit to raise him in any religion. In 2011, he said his views on religion were similar to those expressed by Christopher Hitchens, the British atheist. This is why the atheist organization, Freedom From Religion Foundation, was so proud of him.

His death comes at the same time of a study on suicide issued by the Centers for Disease Control and Prevention (CDC). Suicide rates have spiked dramatically in recent years, in nearly every state. Indeed, suicide is now the 10th leading cause of death in the U.S. One of the chief factors contributing to suicide, the study said, is substance abuse. Bourdain was a known substance abuser.

The study, “Vital Signs: Trends in State Suicide Rates—United States, 1999-2016 and Circumstances Contributing to Suicide—27 States, 2015,” has one glaring flaw: it says nothing about religion. The eight authors of the study disaggregate the data on the basis of sex, age, race/ethnicity, and other factors, but not on religion. This is inexcusable: virtually all studies on suicide include the variable of religiosity, or religious practice and commitment.

As I have recounted in my book, The Catholic Advantage: How Health, Happiness, and Heaven Await the Faithful, there is an inverse relationship between religiosity and suicide: those who are regular churchgoers have a much lower rate of suicide than atheists like Bourdain.

May Anthony Bourdain rest in peace. And may the CDC hire more astute scholars.