'What is Truth?' Evangelist Will Graham to Tackle Question During Good Friday Livestream Outreach

Live from the Billy Graham Training Center at The Cove, program will air at 1 p.m. ET on Friday, April 15 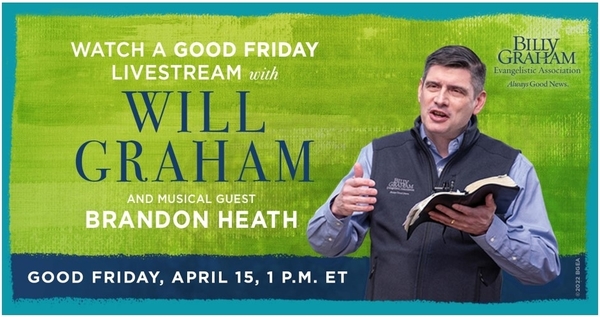 CHARLOTTE, N.C., April 11, 2022 /Standard Newswire/ -- Will Graham and the Billy Graham Evangelistic Association will livestream a special message of hope on Good Friday (April 15) at 1 p.m. ET. The event will be broadcast from the Billy Graham Training Center at The Cove in Asheville, North Carolina, and will feature music from award-winning artist Brandon Heath.

The program will stream online at WillGrahamLive.com, and will be available for on-demand viewing for one week following the broadcast.

"What is truth? It's something many people are asking today, but it's not a new question. In fact, 2,000 years ago, Pontius Pilate asked the exact same thing of Jesus during His trial. 'What is truth?'" Graham said. "Join me on Good Friday as I dig into God's Word and examine this question of truth. In doing so, we'll look at Jesus' sacrifice on the cross, His victory over the grave, and the hope that is found in a relationship with Him."

The Good Friday livestream will be simultaneously translated into American Sign Language and broadcast at Facebook.com/ASLbythelight.

The Good Friday livestream has become a tradition for Graham. This is the third consecutive year he has broadcast a Good Friday message, with his first one taking place just weeks after the initial impact of the Coronavirus pandemic in the United States. Combined, the first two Good Friday specials had more than 40,000 views from at least 75 different countries, with 2,260 indicating that they made a decision to follow Jesus.

About Will Graham
Will is the third generation of Grahams to proclaim the Gospel of Jesus Christ under the banner of the Billy Graham Evangelistic Association (BGEA). He is the grandson of Billy Graham and the oldest son of Franklin Graham. He also serves as vice president of the BGEA, and as executive director of the Billy Graham Training Center at The Cove in Asheville, North Carolina. Follow Will on Facebook, Instagram and Twitter.