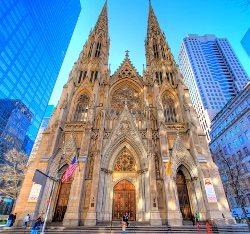 Contact: The Catholic League for Religious and Civil Rights, 212-371-3191, pr@catholicleague.org

The clergy sexual abuse scandal in the Catholic Church made headline news in 2002, even though most of the offenses took place from the mid-1960s to the mid-1980s. Over the past decade and a half, the Church launched many new policies to check this problem, the result being a dramatic reduction in cases of abuse. Indeed, there is no institution in the nation today, religious or secular, that has a better record in dealing with sexual misconduct than the Catholic Church.

Ironically, it is precisely the Church's most prominent and vocal critics who are now undergoing their own sexual misconduct problems: journalism, the arts, Hollywood, and education have all been hit with scandal.

The media have had more than their fair share of problems dealing with sexual predators. Charlie Rose, Matt Lauer, Glenn Thrush, Michael Oreskes, and Mark Halperin are the big names, but no one knows just how deep the scandal goes. Payouts are commonplace, but little in the way of policy changes have been announced.

The Society of Professional Journalists has an impressive list of resources available to members, ranging from freedom of information to ethics in the newsroom. But the only statement it has on its website regarding sexual harassment in the newsroom is a list of articles on the subject.

One of those recommended articles is from the New York Times, a rather strange source of advice given the newspaper's serious problems with sexual misconduct. The suggested article offers nothing more than tips on training and the need to promote more women. The latter is particularly embarrassing: when Jill Abramson was deputy to Michael Oreskes, she knew of his alleged offenses yet she admits she never did anything about them.

For thirty years, Peter Martins ran the New York City Ballet. Insiders knew of his serial offenses: he verbally and physically abused men as well as women. Also, board members knew of his wife beating, yet did nothing about it.

The Academy of Motion Picture Arts and Sciences expelled Harvey Weinstein on October 14, but reports are surfacing saying that many members now regret doing so. Roman Polanski continues to be defended by many in Hollywood, even as new allegations are being made. A task force on sexual misconduct has been launched by the Academy, but it has yet to finalize anything.

Stories of predatory professors abound, and this is especially true of grad students. Yet the only formal committee on sexuality that is listed by the American Association of University Professors deals with "Sexual Diversity and Gender Identity." There is no institutionalized mechanism to address the sexual exploitation of students by professors.

The United States Conference of Catholic Bishops not only has a comprehensive training program for all its employees on sexual abuse, it conducts background checks on all those who work with children. Regarding sexual harassment in the workplace, each diocese has its own policy. The Archdiocese of New York, for instance, has a detailed employee handbook section on this issue, which includes termination in cases of serious sexual misconduct.

The Catholic Church's policies on sexual misconduct provide a model for all organizations and professions. It is high time it received credit for the progress it has made. More important, those who have been its harshest critics need to learn from what it has accomplished and start instituting policies that mirror those of the Church.