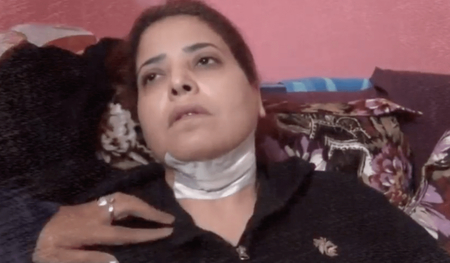 Catherine Ramzi, a Coptic woman with 63 stitches in her neck after having her throat slit by a Muslim man on January 12, 2020 while she was walking home from grocery shopping. (Catherine Ramzi Facebook)

NEWS PROVIDED BY
Coptic Solidarity
May 22, 2020

WASHINGTON, May 22, 2020 /Standard Newswire/ -- The indigenous Coptic Christians of Egypt continue to experience increasing persecution, by the government and society. While many international bodies are praising the el-Sisi government's few rhetorical gestures, the vast majority of civil society, both inside and outside of Egypt, has repeatedly recognized that Egypt is currently experiencing the most severe crackdown on civil liberties and religious freedom violations in decades.

To illustrate, at least five Coptic women, including some minors, have reportedly been kidnapped or disappeared in just the last few weeks, and Egyptian state security has made no concerted effort to recover them. Coptic Solidarity issued a press release regarding the kidnapping of Ranya Abd al-Masih a Coptic wife and mother of three from a town just north of the capital, Cairo. Mrs. Abd al-Masih remains hidden despite protests, including from the region's church, which laments "the total lack of reaction by the authorities." The other Coptic females include: Youstina Magdy Attia, a minor from Beni-Sweif; Christina Maher, another 15-year-old minor from Alexandria; Raymonda Girigs, a married woman; Amani Isaac Hakim from Alexandria; and Hanan Edward, whose brother, Shenouda Edward, filed a missing person case with the typically unresponsive police.

In addition to the kidnapping of Coptic women and girls, other serious incidents targeting Copts and those attempting to exercise free speech have occurred. The public prosecution acquitted the attacker of Mrs. Catherine Ramzi (pictured above). While she was returning home with groceries on January 12 of this year, he grabbed her hair and sliced her neck open in an effort to slaughter her. Fortunately, Mrs. Ramzi survived this heinous attack—yet the perpetrator was just "acquitted," on claims that he was suffering from a mental condition—an all too common tactic relied on by the Egyptian judicial system to acquit those who persecute Copts—despite all the evidence that it was a hate crime.

Just this past May 16, in the early hours, an air conditioning technician threw a Molotov cocktail inside the Virgin Mary Church in Alexandria. Security camera footage led to his apprehension. Fortunately, no one was injured in this attack. Predictably, however, the prosecutors appear to be pursing an acquittal on the claim that the perpetrator of the religious hate crime is also mentally ill. Based on precedent, it is extremely unlikely that this perpetrator will face any consequences for his attempt to torch a church.

After all, the authorities themselves have recently demolished another church building in Beheira governorate for being built "without authorization." This despite its being in place for over ten years and applying for regularization, according to the new and much touted Churches Law. The priest and a number of Copts were further beaten by the accompanying police force, numbering no less than two hundred.

In line with the Egyptian government's current policy of imprisoning any individuals espousing or even perceived of holding views contrary to the current administration, Coptic Solidarity decries the recent arrest of journalists, including the Copt Sameh Hanein, who was—ironically—accused of "assisting a terror organization;" an absurd charge against a Copt whose real "crime" was to report on the persecution of his coreligionists. Ms. Lina Attalah, Editor-in-chief of Mada Masr, was arrested over the weekend and eventually released on bail—though only after great international pressure. Mada Masr is one of the only independent news networks left in Egypt and has suffered harassment and blocking of its website within Egypt by the Egyptian government. Ms. Attalah's "crime" was to report on the ordeal of the mother of the prominent prisoner of conscience, Alaa Abdel-Fattah.

Taken as a whole, these current events confirm Coptic Solidarity's position that the government of President Abdel Fatah el-Sisi is merely making minimal cosmetic changes to appease Western supporters and maintain foreign aid. While Coptic Solidarity has meticulously documented the systematic and systemic discrimination that keeps Egypt's Copts as second-class citizens, Western government officials and diplomats have been only all too eager to lap up rhetorical gestures, superficial actions, and fruitless discourse, rather than to assess the overall situation of Copts and other religious minorities in Egypt.

Coptic Solidarity is an organization seeking to help minorities, particularly the Copts, of Egypt. We support those in Egypt working for democracy, freedom, and the protection of the fundamental rights of all Egyptian citizens, and advocate in cooperation with the affiliated organizations in Canada and in Europe (Solidarité Copte). For more information, contact Lindsay Griffin at 801-512-1713 or coptadvocacy@copticsolidarity.org.