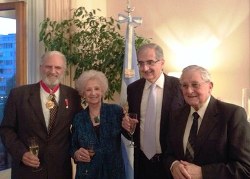 GENEVA, Sept. 18, 2014 /Standard Newswire/ -- A former World Council of Churches (WCC) official, Rev. Charles Harper, has been honoured with the Order Comendador de Mayo, a high decoration of the Argentine government for his emblematic legacy of struggles for human rights in the ecumenical movement.

Harper, a retired Presbyterian clergyman from Brazil and the WCC's director of the Human Rights Resource Office for Latin America from 1973 to 1992, received this honour in a ceremony held on 16 September in Geneva, Switzerland.

The ceremony honouring Harper was hosted by the Argentinean Ambassador Alberto D'Alotto, a human rights advocate and member of Argentina’s Permanent Assembly of Human Rights (APDH). Among those who attended the ceremony were three prominent human rights defenders from Argentina: Bishop-emeritus Aldo Etchegoyen from the Evangelical Methodist Church of Argentina and APDH member; Estela Barnes de Carlotto, president of the Association of the Grandmothers of the Plaza de Mayo, as well as Rosa Tarlovsky de Roisinblit, vice-president of the same organization.

Harper, born to an American missionary father working in Brazil, joined the anti-colonial struggle through the Committee for Assistance to Evacuees (CIMADE). At CIMADE, he worked with young people and Algerian immigrants in Marseille, France, in the early 1960s.

With CIMADE and later as director of the John Knox International Reformed Centre, Harper supported church leaders persecuted in Mozambique, Angola and Cape Verde. Many of those become key actors in the independence struggles of their countries.

At the WCC, Harper coordinated a number of systematic international initiatives denouncing human rights violations in Latin America. He created strong networks to protect the persecuted, imprisoned and tortured people in the region.

Harper recalls that in 1973 when Chile's history was marked by human rights violations, some of the WCC member churches in Argentina started to help thousands of Chilean refugees, especially in the areas of Buenos Aires and Mendoza, through the formation of the Argentinean Refugee Commission (CAREF). "With the military coup in 1976, the Ecumenical Movement for Human Rights (MEDH) was formed, proclaiming the strong sense of spiritual unity and praxis among the churches in Argentina that were committed to defend human rights."

Accompanying human rights movements in the 1970s, the WCC was able to respond to the calls for solidarity at regional and global levels. Harper's work at the WCC was initiated by the WCC member churches in Latin America, following a dialogue held with the WCC's Commission on International Affairs, chaired then by the renowned jurist Dr Theo van Boven, who also received an honour from the Argentine government in 2012.

In a message read by Harper during the ceremony in Geneva, he expressed his gratitude for the decoration sharing it with the wider ecumenical community. "The great honour I receive today is widely deserved by everyone who has responded effectively and with dedication in the World Council of Churches and within the ecumenical movement," he said.

Harper pointed out the current global challenges that a new generation of human rights advocates has to deal with. "Thirty years later - today - the challenges facing the world community of nations, both as international and ecumenical family, not only persist but become more intense: The World Council of Churches, an instrument of unity and service to humanity, strives to accompany churches and groups related to them in critical situations to defend human rights and human dignity, fighting impunity, demanding punitive justice, and building just and peaceful societies."

"The fruitful experience in the past and the achievements of human rights groups in Argentina to defend life, as in other countries in the Americas, has taught us much," said Harper. "The lessons speak for themselves. They serve not only as part of the collective memory but above all as criteria as we face the struggles of today, revealing new and contemporary forms of religious intolerance, violence against women and children, racism, xenophobia, discrimination against minorities, poverty and socio-economic injustice in the world."

At the ceremony, Ambassador Alberto D'Alotto said, "Protestant churches have played an important role in defending human rights and in starting movements for human rights in my country. They helped in founding human rights organizations and sponsored their consolidation, and managed international financing much needed in the beginning."

"The churches helped to find ways to overcome the information blockade imposed by the military authorities, giving international visibility to what was happening in Argentina and denouncing the military repression in international forums," he said.

In 2010, Harper was also honoured with the Chilean award Order Bernardo O'Higgins, holding the degree of Grand Officer. This award was made by the Permanent Representative of Chile to the international organizations in Geneva, Ambassador Carlos Portales.

The World Council of Churches promotes Christian unity in faith, witness and service for a just and peaceful world. An ecumenical fellowship of churches founded in 1948, by the end of 2013 the WCC had 345 member churches representing more than 500 million Christians from Protestant, Orthodox, Anglican and other traditions in over 140 countries. The WCC works cooperatively with the Roman Catholic Church. The WCC general secretary is the Rev. Dr Olav Fykse Tveit, from the [Lutheran] Church of Norway.