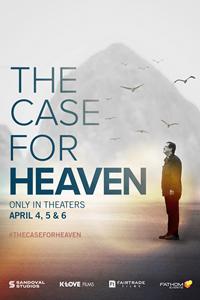 NASHVILLE, April 12, 2022 /Standard Newswire/ -- THE CASE FOR HEAVEN became Fathom's number one faith-based event of 2022 while landing as the 15th biggest faith event of all time for Fathom during its three-day release. Now, Sandoval Studios and K-LOVE Films are bringing the hit documentary home to audiences for a limited time. For the next 14 days, audiences can own the special encore presentation of THE CASE FOR HEAVEN on the Vimeo platform.

Based on the book published by Zondervan Books and written by New York Times best-selling author Lee Strobel, the documentary answers the questions of what awaits us after death, the evidence for heaven and hell, and what really happens in Near-Death Experiences.

Own THE CASE FOR HEAVEN HERE.

In THE CASE FOR HEAVEN, director Mani Sandoval takes audiences on a fascinating journey to find out what happens after we die. Lee Strobel explores the evidence for an afterlife as he addresses mankind's biggest fear: death. THE CASE FOR HEAVEN was inspired by Strobel's own brush with death and will challenge, encourage and inspire viewers. The documentary includes interviews with world-renowned pastor Francis Chan, best-selling author John Burke, Evangelist Luis Palau, and more.

"I am so excited to bring this film to at-home audiences around the world," said Strobel. "If you missed the three-day Fathom event, you still have time to experience the eye-opening testimonies of people who had a brush with death."

For more information about THE CASE FOR HEAVEN digital encore, visit www.thecaseforheavenmovie.com.

About Sandoval Studios
Sandoval Studios is a rising American film and animation studio, creating standout original content that fuels the spirit, inspires the imagination, and moves the heart. Founded by the Sandoval brothers, the team behind the award-winning Sandoval Agency, Sandoval Studios has a slate of documentaries, feature films and animated series coming soon.

About Educational Media Foundation
EMF began as a single radio station in Northern California in 1982 and is now the parent company to K-LOVE and Air1—the nation's largest contemporary Christian radio networks. Broadcast on more than 1,000 signals across all 50 states, EMF is also among the top 10 U.S.-based audio streaming companies. In 2019, the ministry acquired WTA Media, a leader in faith-based films and publishing, and oversees its operations in Franklin, Tenn. In 2020, the ministry launched AccessMore, the leading faith-based podcast platform. With more than 400 employees, EMF is headquartered in Rocklin, Calif., and has field team members in major markets throughout the U.S. For more information, visit KLOVE.com, Air1.com, TheWTAgroup.com, or AccessMore.com.