17-year-old murdered by husband who displayed her severed head; 'Our sisters deserve life to the fullest,' says SAT-7 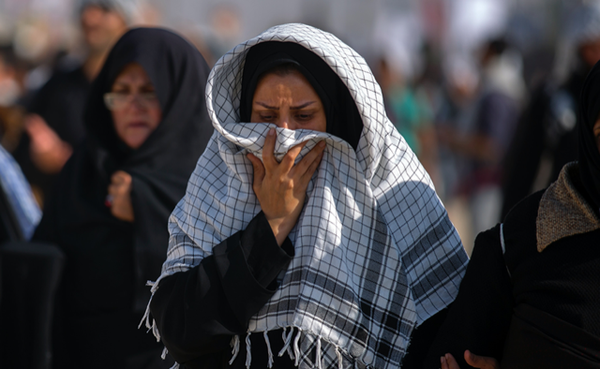 HONOR KILLINGS: HOW MANY MORE MUST DIE? Middle East media ministry SAT-7 (www.sat7usa.org) is highlighting the value of women's lives after a 17-year-old Iranian girl was beheaded by her husband in a so-called "honor killing," one of hundreds in Iran every year.

EASTON, Md., May 10, 2022 /Standard Newswire/ -- A Christian media network in the Middle East is highlighting the value of women's lives after a 17-year-old Iranian girl was beheaded by her husband in a so-called "honor killing," one of hundreds every year.

According to SAT-7 (www.sat7usa.org), Mona Heydari, a child bride at age 13, was beheaded by her husband, Sajjad, after she fled her forced marriage. A gruesome video posted online shows Sajjad smiling as he carries her severed head in the street. The viral video sent shockwaves through Iran where women can be treated like third-class citizens.

The slaying is one of the latest in a string of honor killings in Iran. It's reported up to 450 such assassinations take place there every year, although the real number is likely much higher. According to "The Lancet" medical journal, more than 8,000 honor killings were reported in Iran between 2010-2014.

The National Council of Resistance of Iran (NCRI), a women's rights group, spotlighted shocking examples of honor killings last year, amid a "catastrophic rise" in numbers:

'Blind Eye' to Honor Killings
Heavily influenced by sharia law, Iran's legal system largely turns a blind eye to honor killings that occur when male relatives accuse a woman or girl of bringing "dishonor" on the family. This includes disobeying their husband or father, rejecting a marriage proposal, asking for a divorce, or becoming a Christian.

SAT-7 highlighted the case of 20-year-old Christian convert Iman Sami, the daughter of a Muslim cleric in Iraq, who was allegedly murdered by her family in March after she posted a TikTok video of herself singing Christian songs.

The television network's Farsi-language faith-based and educational programs are watched across Iran, and its 24/7 online channels give viewers -- especially women -- a rare, uncensored public platform to speak out on social issues and taboo topics such as honor killings.

Woman's Life 'Worth Half of Man's'
"Under Iran's law, the life of a female human being is worth half that of a male," one viewer said. "While these injustices and inhumane laws exist, no one will have equal human rights, whether boy or girl, man or woman."

Article 1108 of Iran's civil law says if a woman withholds herself from her husband she does not deserve financial support. "She has to be sexually obedient to her husband and, in the absence of reasons compliant with sharia law, she cannot prevent (his) advances," said local SAT-7 presenter Sally Momtazi.

The network provides encouragement and a message of hope. "Our aim is to show women that their value comes from being created in the image of God," said SAT-7 USA president Rex Rogers, "that he loves them, that salvation through Christ is available to them, and that God has not forgotten the suffering people of Iran."

About SAT-7
Launched in 1996, SAT-7 (www.sat7usa.org) -- with its international headquarters in Cyprus -- is a multimedia ministry that broadcasts Christian and educational satellite television and online programs to people in the Middle East and North Africa. Its mission is to make the gospel available to everyone, and support the church in its life, work and witness for Jesus Christ. SAT-7 broadcasts 24/7 in Arabic, Farsi (Persian), Dari and Turkish, using multiple satellite channels, social media, and online services.