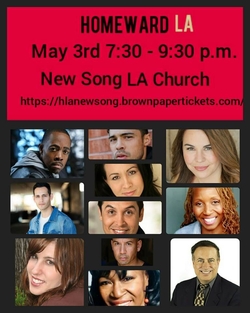 HOLLYWOOD, Calif., April 30, 2019 /Standard Newswire/ -- Actors Cheryl Hines, Richard Rossi, Jeremy Sisto, Alfre Woodard, and Patrick J. Adams are among the Hollywood actors banding together in Homeward L.A., a 10-day citywide event from April 26 to May 5 where multiple productions of monologues, based on stories from people who experienced homelessness, will be performed by hundreds of actors all around Los Angeles, inspiring the community to address the homeless crisis.

"Through storytelling we create community and inspire empathy," Homeward LA believes. "It puts a realness, a humanity to the homeless community," producer Saundra Nicholson said in a radio interview today.

The benefit's purpose, founded by producer Jason Lesner, is to increase awareness around the homeless crisis, and raise funds for The Midnight Mission, a nonprofit organization on Skid Row. Some material contains adult themes and language.

"My entire cast is going to bring it to the stage," Nicholson said.

"Its a great diverse cast," Rossi said. Rossi is a minister turned moviemaker who hosts citywide dinners for the homeless with his wife Sherrie. Other stars like Dick Van Dyke serve meals at Midnight Mission on Thanksgiving.

"I've been telling people Richard Rossi is going to bring this character to life and do an excellent job," Nicholson said.

Last year's Homeward LA raised over $55,000 for Midnight Mission as 300 actors performed in 26 productions. The productions were seen by nearly 2000 people in venues all around Los Angeles. As of this morning the effort has already raised $68,000 with a final goal to exceed $100,000.

"This is what true love, religion, spirituality is all about," Rossi said. "Whatsoever you do for the least of my brethren that you do unto me."

The entire $20 ticket price goes directly to Midnight Mission which provides shelter, food, education, and addiction recovery to L.A.'s homeless since 1914. Tickets for Friday's performance are available online at this link:
https://www.brownpapertickets.com/event/4214706