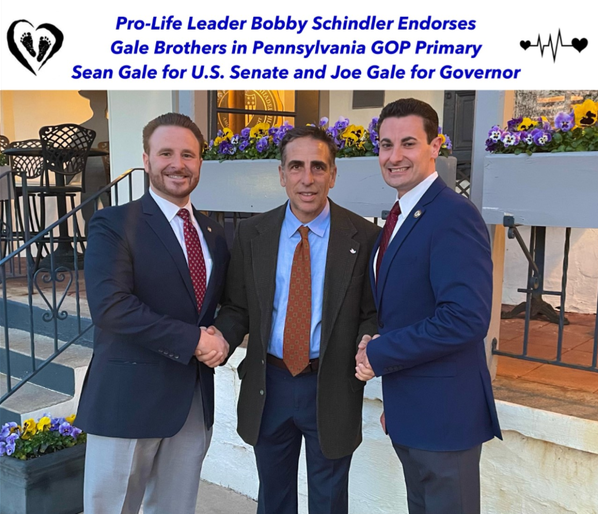 MEDIA ADVISORY, May 12, 2022 /Standard Newswire/ -- The following is submitted by Bobby Schindler:

As the brother of Terri Schiavo, the brain injured woman who was starved and dehydrated to death in 2005, I have dedicated my life to pro-life activism.

From the innocent unborn in the womb to those who have experienced traumatic head injuries like my sister, the voiceless and vulnerable among us deserve a champion who will fight for the right to life.

In 2015, I witnessed firsthand Joe's election to the position of Montgomery County Commissioner after he defeated a board member of Planned Parenthood in the GOP primary. Yes, believe it or not, the Republican Party actually endorsed a board member of Planned Parenthood for Montgomery County Commissioner. Yet, by the grace of God and Sean Gale serving as his campaign manager, Joe Gale stepped up and won both the primary and general election on a pro-life, pro-family platform.

Today, Commissioner Gale is serving in his second term and running for Governor of Pennsylvania. Meanwhile, his brother Sean, who engineered Joe's victories in 2015 and 2019, is running for the United States Senate. Having known Joe and Sean for nearly a decade, I can personally attest to their values, faith and courage.

As the next Republican Governor of Pennsylvania, Joe will do what his GOP predecessors failed to do – he will hold accountable any GOP state legislator who drags their feet on passing pro-life legislation that protects the innocent unborn without exceptions.

As the next Republican U.S. Senator from Pennsylvania, Sean Gale will be a much needed disruptor on Capitol Hill. Sean isn't going to Washington, D.C. to go along to get along with Senate minority leader Mitch McConnell, he's going there to hold accountable both parties who have failed us time and time again.

On Tuesday, May 17th, I strongly encourage every pro-life Republican across the Commonwealth of Pennsylvania to participate in the Republican primary election by voting Joe Gale for Governor and voting Sean Gale for U.S. Senate.